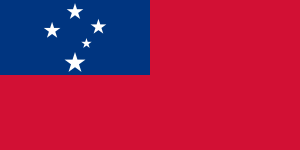 This is the national flag of Samoa. The image source is wikimedia

Samoa is located east of the international dateline and south of the equator, about halfway between Hawai‘i and New Zealand in the Polynesian region of the Pacific Ocean. The Samoa's are of volcanic origin, and the total land area is 2934 km² (slightly smaller than the U.S. state of Rhode Island), consisting of the two large islands of Upolu and Savai'i which account for 99% of the total land area, and eight small islets: the three islets in the Apolima Strait (Manono, Apolima and Nu'ulopa), the four Aleipata Islands off the eastern end of Upolu (Nu'utele, Nu'ulua, Namua, and Fanuatapu), and Nu'usafe'e (less than 0.01 km² in area and about 1.4 km off the south coast of Upolu at the village of Vaovai). While all of the islands have volcanic origins, only Savai'i has had recent eruptions and could be considered volcanically active: the last major eruption occurred in the 1700s, and smaller eruptions occurred between 1904 - 1906. The highest point in Samoa is Mauga Silisili, at 1858 m. The main island of Upolu is home to nearly three-quarters of Samoa's population, and its capital city is Apia. The climate is tropical, with an average annual temperature of 26.5 °C, and a rainy season from November to April.

The economy of Samoa has traditionally been dependent on development aid, private family remittances from overseas, and agricultural exports. The country is vulnerable to devastating cyclones. Agriculture employs two-thirds of the labour force, and furnishes 90% of exports, featuring coconut cream, coconut oil, noni (juice of the nonu fruit, as it is known in Samoan), and copra.Outside of a large automotive wire-harness factory (Yazaki Corporation), the manufacturing sector mainly processes agricultural products. Tourism is an expanding sector; more than 70,000 tourists visited the islands in 1996. The Samoan government has called for deregulation of the financial sector, encouragement of investment, and continued fiscal discipline. 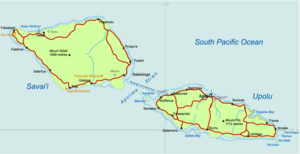 The image source is wikimedia

The development of online educational resources is in its early days with initiatives spearheaded mainly by the National University of Samoa. National initiatives in this area include:

(a) Schoolnet Project Portal development within the Minsitry of education

(c) Virtual classrooms at the National University of Samoa

What is a Wiki Ambassador?

WIKI NEIGHBOUR We are Wiki Neigbours


What is a Wiki Neighbor?

The following are the members of the NUS VUSSC team: