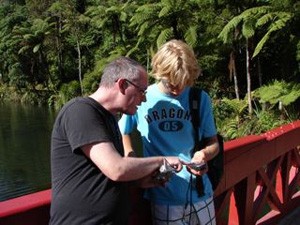 In January 2009, arranged by 60 Springs and involving five high school students working with four artists from.SCANZ explored the use of GPS and other technologies in Pukekura Park. They also explored the integration of customised community software and innovative use of locative, animation, film and gaming technologies in the works created.

Brett Stalbaum was given the project for the scans artist residency. He spent two weeks with his secondary students in pukekura park of which is a hot spot with potential for good new media work with his soft ware (walking tools) that he and his colleges have been working on. IT enables you to”leverage GPS capable mobile phones for basic locative practices such as geo-annotation, drawing and narrative, in addition to telematic geo-spatial performances and other experimental practices. The software platform consists of three general types of software- JavaMe code for execution on clients with mobile phones, server software to enable interaction and coordination between handsets, and production software that allows non-programmers to compose and deploy general features of the software Walking Tools” as Stalbaum said. This would enable the students to trigger audio and image files on their mobile phones as they walk around certain areas of the park. As you walked around the park with your gps cell phone, the software would guide you with use of an arrow and verbal directions to a certain location of the park. Once you had followed the directions and guidelines and reached your destination of the certain area of the park it would deliver information of the surroundings whether that was the history, a myth, or something amusing. Source: http://www.intercreate.org/view/pukekura-park1