Units on demand, elasticity of demand or consumer behaviour dealt with demand side of the market. Firms are the ones which supply the goods and services to the market. In order to have an understanding of the market, it is essential to learn about the behaviour of the firms. There are strong similarities between the optimising decisions made by firms and those made by consumers. The theory of firm describes how firms can make cost-minimising decisions, if they want to increase production, whether they should hire more labour or construct new plants or go for both.


1.Individual Proprietorship– It refers to any business that is owned by a single owner or a single business family. A small provisional stores or a laundry shop is an individual proprietorship. Here the proprietor is responsible for anything good or bad happens to the business. Such firms may be registered or unregistered ones.
2. Partnership – Here there are groups of people who own the business. All of them are co-owners. There may be unlimited liability or each partner is totally liable for all what happens to the firm. That means if some payments are to be made and the other partners can not make, then one of them is fully liable to make the payments.
3. Corporations– In this form of a firm ownership, anyone can become a share-holder of a firm and have limited liability equal to his ownership share in the company. That means if Mr. X holds 20% of the company’s share, he is responsible for 20% of outstanding payments of that company. MTNL, Reliance Industries, Tata Motors, etc are the examples of corporations.

With this background information about the firm, its ownership structure and its objectives, let us begin with the analysis of the concept of production. A story of production and firm’s behaviour will be easier to follow once we take a note of following concepts:-

It is process by which the inputs or factors of production are transformed into output. In a cement factory, inputs include labour of its workers, raw materials such as limestone, sand, clay, and capital invested in equipment required to produce cement. Output of cement industry would be different varieties of cement. 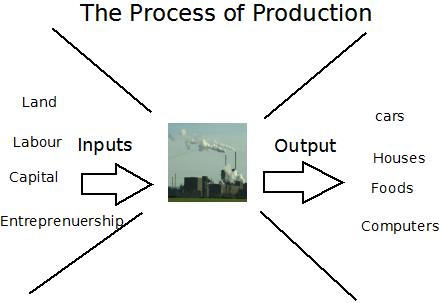 2.Inputs or factors of production

There are four factors of production, land, labour, capital and organisation. All these are brought together in the process of production to form a final output. Land represents natural resources like land plots, minerals, water, oil, etc. Labour is considered to be an integral part of the process of production. Both skilled and unskilled labour is required by the firm. Capital represents physical capital in the form of machinery, equipment, plants, factory and other physical assets. Finally, organisation/entrepreneur brings all these factors of production together to transform them into a finished product. 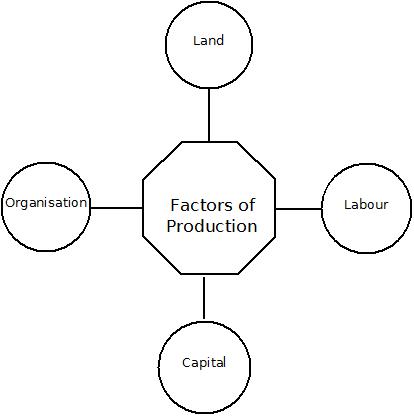 In the theory of production, short run is a period during which some of the factors of production mentioned above are constant. For example, in the short run, firm can not buy a new machine. So capital may remain constant in the short run. If it has to increase production in the short run, it may do so by hiring more contract labour to work on the same stock of machines or equipment. Long run, on the other hand, is a period, during which all the factors of production can vary. A firm can not only hire more/less labour but also can increase/reduce size of plant, buy more/sale existing stock of capital, and so on. One should keep in mind, the short-run and long-run period in production theory, is not time specific. For a poultry firm, for example, long run will be a period, till it increases its capacity by adding poultry stock (which may take say 2 weeks). But for a cement factory, it may take 2 years to increase its capacity by constructing a new plant. So long run for cement factory may be 2 years.

L is labour used in process of production

K is capital used in the process of production

That means, firm’s output depends upon the labour employed and units of capital services used up in the production. Now, suppose a firm requires to increase its output, it cannot change the quantities of labour and capital at the same speed. Generally labour units can be employed at a short notice but it takes more time to install machinery or equipment i.e. capital. In the short run, one of the inputs may remain fixed say capital. Other inputs that may remain fixed in the short run may be supply of skilled labour, land plot, etc. But some inputs like unskilled labour units can be easily changed even in the short run.

So we can further define production function using the short-run and long-run period.

There are two distinct types of production function that show possible range of substitution inputs in the production process. 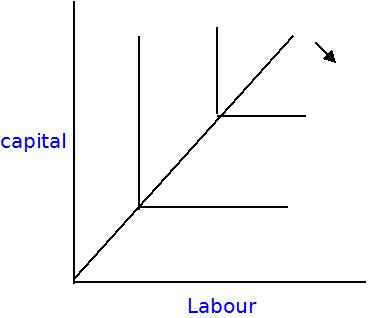 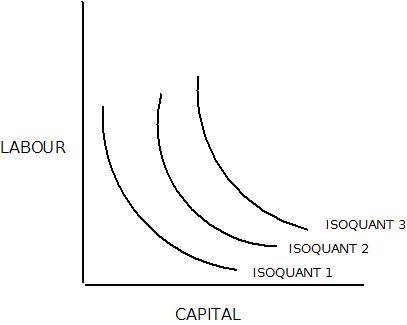 The short run analysis of production function is done with one input variable (L) and the other input constant (K). The variation in the output resulting from different amounts labour applied to a fixed amount of capital is explained with the help of Law of Diminishing Returns or Law of Variable Proportions

The long run analysis of production function is done with both the inputs(L,K) variable. The variation in the output resulting from different amounts of labour and capital employed is explained with the help of Law of Returns to Scale

Where Q is total output,

L stands for quantity of labour,

K is quantity of capital,

A, α and β are positive constants.

1. Average Product of factors of production used up in this function depends upon the ratio in which the factors are combined for the production of commodity under consideration

2. Marginal Product of factors of production used up in this function also depends upon the ratio in which the factors are combined for the production of commodity under consideration

3. Cobb-Douglas production function is used in obtaining marginal rate of technical substitution ( the rate at which one input can be substituted for the other to produce same level of output) between two inputs.

Can You solve this quiz?


Process of Production -It is a process by which the factors of production are transformed into the final output.


Production Function -It is a technical relationship between inputs and given level of output.


Technical coeffcient of production- the amount of inputs required to produce a unit of output.


Fixed Proportion Production Function  -It is a production function where technical coefficient of production is contant.


Variable Proportion Production Function -It is a production fucntion where technical co-efficient of production is variable.