A number of OERu courses use microblogging to support learning and help learners connect with each other. We anticipate that a large number of OERu learners will not be active microbloggers. This support tutorial has been prepared for students who have been asked to create a microblog account to support their learning, but don't know where to start.

Microblogs originated in 2005 when they were first known as tumblelogs[1]. By 2006 and 2007, the term microblog came into greater usage referring to services offered by Tumblr and Twitter.

Think of a microblog as a stream of digital consciousness comprising short and concise posts in answer to the question: What are you doing or thinking now? 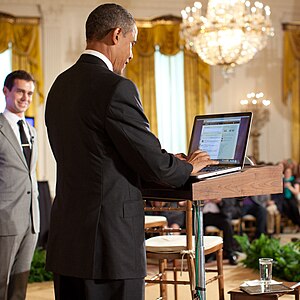 President Barack Obama tweets a question during the Twitter Town Hall on 6 July 2011.
Let us know if you are a regular microblog reader or poster and whether this is your first attempt to create a microblog account by logging into WikiEducator (you can create a free account) and responding to the following poll: