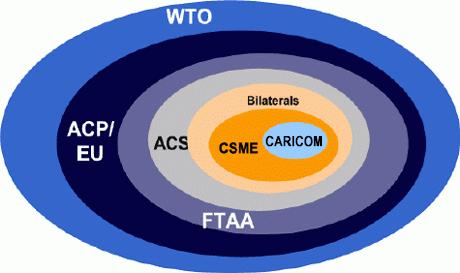 The Grand Anse Declaration had the key features:

Full Members of the CSME

All goods which meet the CARICOM rules of origin are traded duty free throughout the region (except The Bahamas), therefore all good originating within the region can be traded without restrictions. In addition, most member states apply a Common External Tariff (CET) on good originating from non-CARICOM countries. There are, however, some areas still to be developed:

Another key element in relations to goods is Free Circulation. This provision allows for the free movement of goods imported from extra regional sources which would require collection of taxes at first point of entry into the CSME and for the sharing of collected customs revenue.

Complementary to the free movement of goods will be the guarantee of acceptable standards of these goods and services. To accomplish this, CARICOM members have established the Caribbean Regional Organization on Standards and Quality (CROSQ). The Organization will be responsible for establishing regional standards in the manufacture and trade of goods which all Member States must adhere to. This Organization was established by a separate agreement from the CSME.

Trade in Services and The Right of Establishment 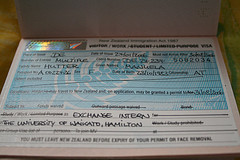 An example of a Work Permit

Work Permits and the Free Movement of People

The Free Movement of Skilled Persons, arises from an agreed CARICOM policy that was originally separate but related to the original Protocol II of the Revised Treaty of Chaguaramas. The agreed policy, called The Caribbean Community (CARICOM) Free Movement of Persons Act, is now enacted legislation in all the CSME Member States. It provides for the free movement of certain categories of skilled labour, but according to the policy there is to be eventual free movement of all persons by 2008. Under this legislation, persons within these categories can qualify for Skills Certificates (which allow for the free movement across the region).

Since the start of the CSM, eight categories of CARICOM nationals have been eligible for free movement throughout the CSME without the need for work permits. They are: University Graduates, Media Workers, Artistes, Musicians, Sportspersons, Managers, Technical and Supervisory Staff attached to a company and Self-Employed Persons/Service Providers. In addition the spouses and immediate dependent family members of these nationals will also be exempt from work permit requirements. At the July 2006 CARICOM Summit, it was agreed to allow for free movement of two more categories of skilled persons; tertiary-trained Teachers and Nurses. It was also agreed that higglers, artisans, domestic workers and hospitality workers are to be added to the categories of labour allowed free movement at a later date, pending the agreement of an appropriate certification.

The Free Movement of Labour is also being facilitated by measures to harmonize social services (health, education, etc.) and providing for the transfer of social security benefits (with the Bahamas also being involved). Regional accreditation will also facilitate the free movement of people/labour.

Concurrent with (and to some extent pre-dating) the free movement of people is the easier facilitation of intra-regional travel. This aim is being accomplished by the use of separate Lines identified for CARICOM and Non-CARICOM Nationals at Ports of entry (already in place for all 13 members) and the introduction of a CARICOM passport and Standardized Entry/Departure Forms.

The free movement of Capital involves the elimination of the various restrictions such as foreign exchange controls and allowing for the convertibility of currencies (already in effect) or a single currency and capital market integration via a regional stock exchange. The member states have also signed and ratified an Intra-Regional Double Taxation Agreement.

Although not expected until at least 2008 (and even that date will probably be subject to delays) it is intended that the CSME will have a single currency. As it stands a number of the CSME members are already in a currency union with the East Caribbean dollar and the strength of most regional currencies (with the exception of Jamaica's and Guyana's) should make any future exchange-rate harmonization between CSME members fairly straightforward as a step towards a monetary union.

The aim of forming a CARICOM monetary union is not new. As a precursor to this idea the various CARICOM countries established a compensation procedure to favour the use of the member states currencies. The procedure was aimed at ensuring monetary stability and promoting trade development. This monetary compensation scheme was at first bilateral, but this system was limited and unwieldy because each member state had to have a separate account for each of its CARICOM trade partners and the accounts had to be individually balanced at the end of each credit period. The system became multilateral in 1977 and was called the CARICOM Multilateral Clearing Facility (CMCF). The CMCF was supposed to favour the use of internal CARICOM currencies for transaction settlement and to promote banking cooperation and monetary cooperation between member states. Each country was allowed a fixed credit line and initially the CMCF was successful enough that both the total credit line and the credit period were extended by 1982. However, the CMCF failed shortly thereafter in the early 1980s due to Guyana’s inability to settle its debts and Barbados being unable to grant new payment terms

Despite the failure of the CMCF, in 1992 the CARICOM Heads of Government determined that CARICOM should move towards monetary integration and commissioned their central bankers to study the possible creation of a monetary union among CARICOM countries. It was argued that monetary integration would provide benefits such as exchange rate and price stability and reduced transaction costs in regional trade. It was also thought that these benefits in turn would stimulate capital flows, intra-regional trade and investment, improve balance of payments performance and increase growth and employment.

The Central Bank Governors produced a report in March 1992 that outlined the necessary steps and criteria for a monetary union by 2000. The 1992 criteria were amended in 1996 and were known as the 3-12-36-15 criteria. They required that:

The report envisioned the fulfillment of a monetary union in 3 phases on the basis of grouping the member states into 2 categories, A and B. Category A included the Bahamas, Belize and OECS states. Category A countries had already met the original criteria in 1992 and only had to maintain economic stability to begin the monetary union. Category B consisted of Barbados, Guyana, Jamaica and Trinidad and Tobago (Suriname and Haiti were not yet members and so were not included). These countries had to make the necessary adjustments to meet the entry criteria.

Phase 1 of the monetary union process was scheduled to conclude in 1996. It was to include the Bahamas, Barbados, Belize, the OECS states and Trinidad and Tobago and there was to have been a common currency as a unit of account (cf. the Euro from 1999 - 2002) amongst these states with the exception of the Bahamas and Belize. This phase would also involve the coordination of monetary policies and the movement towards intra-regional currency convertibility among all member states. Phase 1 would also have seen the formation of a Council of CARICOM Central Bank Governors to oversee the entire process.

Phase 2 was to have occurred between 1997 and 2000 and should have seen a number of initiatives:

Phase 3 was planned to begin in 2000 and had as its ultimate goal to have all CARICOM countries entering into the monetary union and membership of the CMA. However, the implementation of Phase 1 was put on hold in1993 as a result of Trinidad and Tobago floating its dollar. In response and in an effort to continue pursuing monetary cooperation and integration, CARICOM Central Bank Governors made their regional currencies fully inter-convertible. A subsequent proposal called for Barbados, Belize and the OECS states to form a currency union by 1997 but this also failed.

The World Trade Organization (WTO) is an international body whose purpose is to promote free trade by persuading countries to abolish import tariffs and other barriers. As such, it has become closely associated with globalisation.

The WTO is the only international agency overseeing the rules of international trade. It polices free trade agreements, settles trade disputes between governments and organises trade negotiations. WTO decisions are absolute and every member must abide by its rulings. So, when the US and the European Union are in dispute over bananas or beef, it is the WTO which acts as judge and jury. WTO members are empowered by the organisation to enforce its decisions by imposing trade sanctions against countries that have breached the rules.

Based in Geneva, the WTO was set up in 1995, replacing another international organisation known as the General Agreement on Tariffs and Trade (GATT). GATT was formed in 1948 when 23 countries signed an agreement to reduce customs tariffs.

The WTO has a much broader scope than GATT. Whereas GATT regulated trade in merchandise goods, the WTO also covers trade in services, such as telecommunications and banking, and other issues such as intellectual property rights.

Membership of the WTO now stands at 150 countries. China formally joined the body in December 2001 after a 15-year battle. Russia wants admission, but must first convince the EU and US that it has reformed business practices.

The highest body of the WTO is the Ministerial Conference. This meets every two years and, among other things, elects the organisation's chief executive - the director-general - and oversees the work of the General Council.

The Ministerial Conference is also the setting for negotiating global trade deals, known as "trade rounds" which are aimed at reducing barriers to free trade.

The General Council is in charge of the day-to-day running of the WTO and is made up of ambassadors from member states who also serve on various subsidiary and specialist committees.

Among these are the Dispute Settlement Panels which rule on individual country-against-country trade disputes.

The WTO has been the focal point of criticism from people who are worried about the effects of free trade and economic globalisation. Opposition to the WTO centres on four main points:

Supporters of the WTO argue that it is democratic, in that its rules were written by its member states, many of whom are democracies, who also select its leadership.

They also argue that, by expanding world trade, the WTO in fact helps to raise living standards around the world.