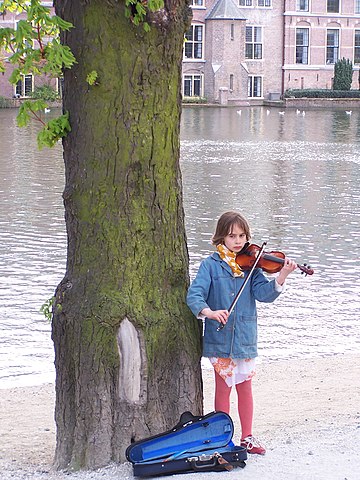 A girl playing violin in The Hague.

Quasi‐experiments are studies that use a research method that resembles an experiment, but the variables that distinguish the groups are not directly manipulated. Typically, quasi‐experimental designs are utilized when the variable that the researcher wishes to study cannot be manipulated for ethical or practical reasons.

For example, a researcher may be interested in the effects of a certain characteristic (sex, height, religion, age, or intelligence) on language development. For ethical reasons, a researcher could not sneak into prenatal classes and inject expectant mothers with a hormone cocktail such that they all gave birth to males. Instead, he or she might wait until the babies were born, and the males would be assigned to one group and the females to the other group. Importantly, the researcher does not randomly assign the participants to the groups; in a sense, Nature does it for the researcher. Because the variable of interest in quasi‐experimental designs is not directly manipulated by the researcher, it is not considered a true independent variable. Therefore, to distinguish variables such as sex, height, sexual preference, and age in quasi‐experiments from true independent variables, they are referred to as subject variables. Subject variables are characteristics that participants possess prior to their assignment to groups.

It is important to remember that only true experiments (discussed in Unit 4) can allow the researcher to determine cause and effect. Nonexperimental research approaches, including using quasi-experimental methods, have several potential confounds. For example, in one study, researchers looked at precocious 13 year-old male and female math students and then compared them 4 decades later on various variables such as education, occupation, income, and retrospective, prospective, and ideal time allocation on family and work. One of the salient gender differences was that mathematically gifted men expressed stronger preferences for developing high-impact careers while the women expressed stronger preferences for and devoted more time to advancing family and community (Lubinski, Benbow, & Kell, 2014).

This was a quasi‐experimental design because students were assigned to groups based on whether they were males or females. The two groups, males and females, probably differed in more than their chromosomes, however, and some of these differences could plausibly account for the study’s results. For example, the males may have followed a different path than the females because of cultural role models, discrimination, parental or societal expectations, or differences in opportunity.