From the first forms of art criticism in ancient Greece, the discussion of meaning in art has taken many directions. As we discussed in the unit on the artistic process, the professional art critic is one of the gatekeepers who, through their writing, endorse or reject particular kinds of art, whether in style, artistic ability or message. In fact, a study of the different ways to look at art can tell us much about changing times and philosophies: the role of aesthetics, economics and other cultural issues have much to do with the origin of these philosophical positions. Of course, none of them are completely true but simply different types of discourse. People approach meaning from different perspectives. The artworks sit silent while all around them the voices change. We are at a time when there are several, sometimes greatly conflicting, ways of thinking about meaning in art. The following are six different perspectives art critics use as compasses to interpreting meaning.

We started this course with a discussion of what art is. That discussion was actually based on one of the ways to look at art: what is known as structuralism. Structuralism is based on the notion that our concept of reality is expressed through language and related systems of communication. On a larger scale, visualize culture as a structure whose foundation is language, speech and other forms of communication. When this approach is applied to the visual arts, the world of art becomes a collective human construction, where a single work needs to be judged within the framework supported by the whole structure of art. This structure is still based in language and knowledge and how we communicate ideas.

I often use the example of the word "cowboy". In your head: visualize a cowboy: then describe what you saw. What gender was your person? What race was this person? Now let’s apply those answers to historical fact. The fact is upwards of 60% of the historical cowboys in the United States were black slaves freed after the civil war. Did you see your cowboy as white? Your idea of cowboy might have come from film, which is an extremely different form of reality. The structural idea manifests itself when we look for meaning in art based on any preconceived ideas about it we already have in our mind. These preconceptions (or limitations) are shaped by language, social interaction and other cultural experiences.

This goes one step further, and posits that any work of art can have many meanings attached to it, none of which are limited by a particular language or experience outside the work itself. In other words, the critic must reveal (deconstruct) the structured world in order to knock out any underpinnings of stereotypes, preconceptions or myths that get in the way of true meaning. Taking the perspective of a deconstructive critic, we would view a portrait of Marilyn Monroe by pop artist Andy Warhol as an imaginary construct of what is real. As a popular culture icon, Marilyn Monroe the movie star was ubiquitous: in film, magazines, television and photographs. Marilyn Monroe the person committed suicide in 1962 at the height of her stardom. In truth, the bright lights and celebrity of her Hollywood persona eclipsed the real Marilyn, someone who was troubled, confused and alone. Warhol’s many portraits of her-–each one made from the same publicity photograph-–perpetuate the myth and cult of celebrity.

This is what we engaged in when we looked at the elements and principles of art, in the unit "The visual language". Formalism doesn't really care about what goes on outside the actual space of the work, but finds meaning in its use of materials. One of the champions of the formalist approach was Clement Greenberg. His writing stresses “medium specificity”: the notion that there is inherent meaning in the way materials are used to create the artwork. As it relates to painting and works on paper, the result is a focus on the two-dimensional surface. This is contrary to its traditional use as a platform for the illusion of depth. Formalism allows a more reasoned discussion of abstract and nonrepresentational art because we can approach them on their own terms, where the subject matter becomes the medium instead of something it represents. This is a good way to approach artworks from cultures we are not familiar with, though it has the tendency to make them purely decorative and devalue any deeper meaning. It also allows a kind of training in visual seeing, so it is still used in all studio arts and art appreciation courses.

Greenberg was a strong defender of the Abstract Expressionist style of painting that developed in the United States after World War 2. He referred to it as “pure painting” because of its insistence on the act of painting, eventually releasing it from its ties to representation. 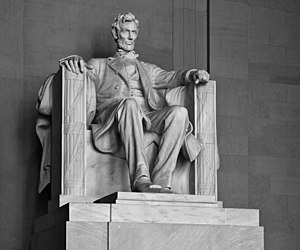 Statue of Abraham Lincoln, The Lincoln Memorial, Washington, D.C.
This type of criticism is most concerned with the relationship between art and structures of power. It infers that art is embedded in a social, economic and political structure that determines its final meaning. Born of the writings of Karl Marx, ideological criticism translates art and artifacts as symbols that reflect political ideals and reinforce one version of reality over another. A literal example of this perspective would view the Lincoln Memorial in Washington, D.C. as a testament to a political system that oppressed people because of race yet summoned the political will to set them free in the process of ending a Civil War: 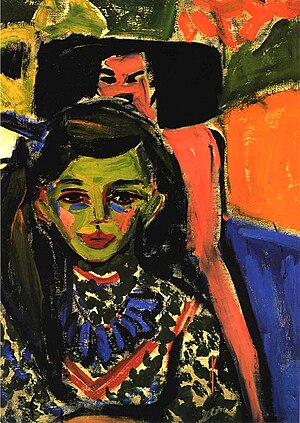 Ernst Ludwig Kirchner, Franzi in Front of a Carved Chair, 1910, oil on canvas, Thyssen-Bornemisza Museum, Madrid
In contrast, Ernst Ludwig Kirchner’s painting Franzi in Front of a Carved Chair from 1910 is also considered a symbol of artistic (hence, political) freedom. His Expressionist art – with its strong, sometimes arbitrary colors and rough approach to forms, was denounced by Nazi Germany as being “degenerate”. The Degenerate Art Show of 1937 was a way for the German political establishment to label modern art as something evil and corrupt. Hitler’s regime was only interested in heroic, representational and idealistic images, something Kirchner was rebelling against. Kirchner and other Expressionist artists were marginalized and many of their works destroyed by the authorities.

This is the way we should look at work if we feel it is only about personal expression. The purest form of this criticism ranks the work of untrained and mentally ill artists as being just as important as any other art. It is in this way that the artist “inside” is more important than any other reason the art happens or the effect the art has. Often when discussing Vincent van Gogh you will hear people discuss his mental state more than his actual artwork, experience, or career. This is a good example of psychoanalytic criticism. One of the problems in this type of criticism is that the critic is usually discussing issues the artist themselves may be totally unaware of (and may deny these issues exist).

Feminist criticism came in the 1970's as a response to the neglect of women artists over time and in historical writings. It is still interesting to note that some texts I have read actually state that women were not successful artists in history (check out Artemisia Gentileschi or Elizabeth Vigee Lebrun as examples of the silliness of this statement). This form of criticism is specific to viewing art as an example of gender bias in historical western European culture and views all work as a manifestation of this bias. Feminist criticism created whole movements in the art world (specifically performance based art), and has changed over the last few years to include all underrepresented groups. Examples of feminist art include Judy Chicago’s large-scale installation The Dinner Party and the work of Nancy Spero.

In reality, all of these critical perspectives are true. Art is a multifaceted medium that contains influences from most all the characteristics of the culture it was created in, and some that transcend cultural environments. It is important to be aware of all the issues involved, take aspects of each critical position depending upon the work to be viewed, the environment (and context) you’re seeing it in, and make up your own mind.