Morning Mist
So after we see the object, we can understand how it is "made": its form. With every mark the artist's hand makes, we see how quickly, which direction, what kind of energy it leaves. In fact, when we begin discussing history you will see that there is a big difference between work in which the artist's hand is visible and work that is purely gestural; that is, abstract or non-objective work where the focus is on the application of the medium to the artwork. Often we have trouble with the purely gestural, because this contradicts ideas we have about skill and talent. Also, the invention of the photograph has greatly changed our ideas about what looks correct. A good example of this idea can be seen by comparing the image at right with an image by Mark Rothko.

The Morning Mist image is a digital photo of a foggy landscape, while the link is a painting by the Abstract Expressionist painter Mark Rothko. When you compare the two, you see that there are similarities; bands of complementary color spread horizontally across the surface in layers. Yet Rothko’s painting is much more reductive than the photo. The space is flat, sitting right on the surface of the canvas, whereas in the photo you get a feeling of receding space as areas of color overlap each other. This similarity is not coincidental. As a young man Rothko lived in Portland, Oregon, and hiked the Cascade Mountains. On hikes to higher elevations, he saw the landscape and atmosphere around him and was especially moved by the colors in the sky near the horizon just before sunrise and just after sunset.

Now you can imagine these memories reflected in Rothko’s series of abstract "color field" paintings. It’s simplistic to say this was Rothko’s only influence. As an artist he explored painting styles emerging out of Surrealism, including automatic drawing and more complex mythomorphic techniques. But it’s hard to deny that to some extent his paintings are based on what he saw. Click the link to read more about Mark Rothko. 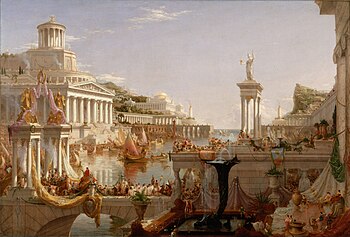 Thomas Cole, The Consummation, 1836, oil on canvas, 51 x 76 in., New-York Historical Society, New York City
In another example of formal similarities, early photographs were actually made to look like paintings, including scratching and painting over their surface, because the perfection of the photographic image was considered too perfect and mechanical. We can see this in a comparison of a nineteenth century photo of the Acropolis in Athens, Greece, and the image from the series The Course of Empire by Thomas Cole titled The Consummation. Both show a commanding view of a classical landscape. The photo mimics Cole’s painting in formal terms, emphasizing the grandeur of the architecture within a vast expanse of space.

Conversely, realist paintings from the 19th century were sometimes ridiculed for being too lifelike but not ‘ideal’ enough. Theodore Gericault’s Raft of the Medusa is an example: read A Hint of Scandal as to why such a realistic, powerful painting could be caught up in controversy. Nowadays people often proclaim that a painting is good because it looks "just like a photograph". 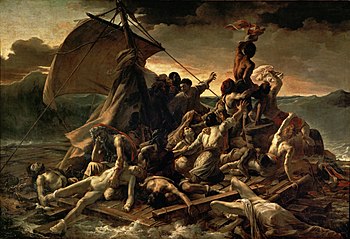 The rise of modern art produced artistic styles that challenge viewers in finding meaning in the works they see. The use of abstraction and gesture as subject matter runs counter to traditional avenues for finding meaning. It is in this gestural approach, however, that much of the grace and delicacy, as well as power, anger or other emotions can be conveyed. In other words, it is the application of the elements that can give us clues to a work’s meaning. If we then take the formal quality of application (what kind of line, how the paint is applied, etc) and combine it with a specific subject you can discover a meaning from the combination of these visual effects.

When looked at from this perspective, the paintings of the Expressionists become more meaningful. In particular, the art of Joan Mitchell captures the exuberance and energy that the application of paint can achieve (see Formalist criticism in Critical perspectives later on in this unit).

This bridge between formal quality and subject matter can be applied to meaning in works of art from many cultures. Gesture and pattern combine to enhance the meaning of more decorative works like the paintings from a Ceremonial House ceiling from the Sepik region of New Guinea. The ceremonial house was built as a place for spirits to dwell. The paintings themselves indicate abstracted images of faces making fierce gestures, suns and female genitalia, all in reference to the spirits surrounding the ceremony taking place inside.