Perhaps Titokowaru's most infamous victory, this battle sent reverberations across the country. Drawn into a trap on the flat ground in front of a modest pa at Te Ngutu, the European soldiers were decimated by Ngati Ruanui. A hollow rata tree was loopedholed with rifle slits and conceal firing pits surrounded the battlefield. One group of eight warriors shot 10 European soldiers in a couple of minutes, reloading their muskets fast enough to hit several soldiers twice. The battle has also been glorified somewhat for the fact that Major Gustavus Von Tempsky died during the battle. Titokowaru's victory coincided with Te Kooti's attacks in Poverty Bay to generate what Belich calls 'The Crisis of 1868'[1] 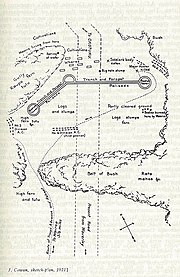 The battlefield of Moturoa
Following the events at Te Ngutu o Te Manu, McDonnell was replaced by Colonel George Whitmore, a move that was widely seen as a positive step. After Titokowaru's victory, European settlers through Taranaki became fearful of attack and many withdrew to stockades or abandoned their farms. Titokowaru burnt many settler buildings and regained territory up to the Waitotata River before establishing a fortress at Moturoa.[2] Whitmore decided that time was of the essence and that he would attack before the position was fully established. On the 7th of November, Whitmore attacked at dawn, The advance guard was seen by one of Titokowaru's men and a strong volley of shots met them 10 yards from the front wall. After being prevented from outflanking the pa, and under heavy fire, Whitmore decided to retreat, leaving about 30 en dead on the battlefield.

The most mysterious enigma surrounding Titokowaru is what led up to the collapse of his support at Tauranga Ika. Overnight it appears that his supporters deserted him, presumably because of some indiscretion or loss of mana. Belich has speculated the cause of this was some kind of carnal impropriety.

Whitmore and Kepa pursued Titokowaru and what was left of his fighting force through the bush, eventually abandoning the chase.

Shortly after Titokowaru's defeat, a group of Maori attacked and burned the British redoubt at Pukearuhe in North Taranaki. While most of the farmer-soldiers who defended the stockade were away working their land, the small settlement was defenceless. The Maori taua from Mokau killed 9 people, including Rev. John Whiteley.