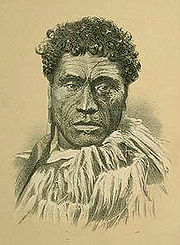 Sketch of Te Kooti from 'Reminiscences of the war in New Zealand' by Thomas W. Gudgeon 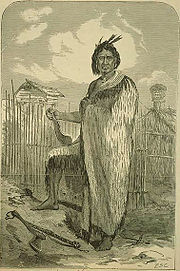 The campaigns of Titokowaru and Te Kooti make a movement away from large-scale battles towards what might be called a guerrilla-style war. Both Titokowaru and Te Kooti were experts in broken combat and in mounting swift attacks on weaker targets. Te Kooti in particular was adept at striking small settlements before disappearing into the bush again. Belich says that while Titokowaru's campaigns during the Crisis of 1868 lent it substance, it was Te Kooti's that lent it 'a touch of terror'.[1]

" 'They could scarcely be recognized as men as they came out after their long defence,” said a member of Ngati-Porou, who had fought at Waerenga-a-Hika; “they were covered with mud, and their hair was long and shaggy.' The Hauhau losses in this siege, which ended on the 22nd November, 1865, were more than a hundred killed, besides several scores wounded. The Government casualties were eleven killed and twenty wounded."[2]

Wharekauri and the Rifleman

[Image:Waitangi bay and settlement chatham islands.jpg|Waitangi Bay and settlement, Chatham, Islands|right|thumb] Te Kooti Arikirangi was arrested during the battle of Waerenga-a-hika on suspicion of treason. He was fighting on the Government side, but was apprehended by one of the kupapa rangatira for allegedly removing the bullets from his cartridges so he only fired blanks at the kingites. Te Kooti strenuously denied this accusation and was eventually released.[3] He was subsequently arrested on other charges, but rather than being brought to trial, he was exiled to Wharekauri (The Chatham Islands) because he was deemed "too turbulent and unreliable a character to be at liberty".[4] For two years, Te Kooti and his fellow prisoners languished on Wharekauri, although a number of the principal chiefs were allowed to return to the mainland. During 1867, Te Kooti said he received a Divine message commanding him to begin a new religion for the Maori people and to release them from bondage. Te Kooti began to lead religious services for his fellow inmates and gained a level of control over them. On the 4th of July 1868, Te Kooti captured the schooner 'Rifleman' and boarded it with 298 Maori. He attempted to make way for the mainland, but unfavourable winds kept him in the harbour for three days. Decided there must be a traitor onboard, Te Kooti prayed to God and had it revealed unto him that it was his uncle Te Wahiri Potini. This man had revealed information to Europeans about the karakia that Te Kooti used and as a result, had incurred his wrath. Te Kooti order Te Wahiri thrown overboard, whereupon the winds turned around and carried the vessel towards Poverty Bay and Matewhero. When Te Kooti left Wharekauri, he took with him 298 followers and £522 stolen form the government safe.

Following landfall from Wharekauri, Te Kooti and his supporters gathered themselves together and prepared to attack Matawhero. The reasons behind the attack are complicated but almost certainly it was a carefully targeted attack on people who had been duplicitous with Te Kooti or in land deals which hastened Maori alienation from their land. One of Te Kooti's targets was Major Biggs, whose house he approached around midnight on 9th November. Te Kooti is rumoured to have knocked on the door of Biggs' house. When asked 'Who's there?' Kooti replied 'Open up and see.' Biggs and his family's murders sparked off 48 hours of death and arson in Matawhero. This attack, while it was motivated by utu for land theft and his own wrongful imprisonment, made Te Kooti the most feared man in the country. 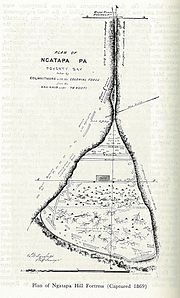 Ngatapa viewed from the East

General Whitmore led a force to attack Te Kooti's stronghold at Ngatapa, The pa, however, was without an internal water source which made it vulnerable to siege. Between the 5th and 11th of December, Whitmore received reports that the pa had been abandoned and decided to withdraw his troops via the steamship Sturt. Luckily as it turns out, the Sturt holed itself and required repairs. Having learnt that Te Kooti was still atop Ngatapa, Whitmore strengthened his force with local reinforcements and began the siege. On January 1st 1869, a mix of European and kupapa troops surrounded Ngatapa and sporadic fighting began. Overnight on the 4th of January, Te Kooti and many of his supporters lowered themselves down the precipitous cliffs surrounding the pa and escaped. One of the largest atrocities in the New Zealand Wars occurred the following morning when 120 prisoners were executed in cold blood by Ngati Porou. From this point on, Te Kooti was broken and would never mount another effective campaign.

Opepe, the scene of a surprise attack

After the disastrous Ngatapa campaign, Te Kooti received sanctuary from Tuhoe in Te Urewera. Following a couple of unsuccessful raids into Whakatane and Mohaka, Te Kooti was followed into Te Urewera by around 1300 troops.