He Weeps for You

Bill Viola ‘He Weeps for You’

In 1976 Bill Viola creates new media art with the use of video, sound and amplifying technology.

The ideas behind this piece of art come from two ideas of thought one being in-experience and research for background. In the early 1970s Bill Viola first became aware and interested in eastern religion, which he then started to research by reading books. He began to like the ideas behind the religions as they explored the formal systems. Bill Viola liked these ideas because as a child he liked the ideas of what these religions shared like the relationship between humans and nature and spirits, while not knowing about Buddhism, Hindu etc. The thing that impressed Bill Viola the most was the “microcosm and the macrocosm” meaning the large world and the small world and how there is a strong connection between them both and how they reflect/ mirror each other.

The idea came to him one night when he was walking home. It was raining and he was wearing glasses. The water was running from the top of his classes. He then removed his glasses to clean them and noticed that he could see though the droplets of water. This made him very interested. He then started experimenting with the water and what effects it had with using a drum and video camera.

The new media art consisted of A drop of water emerging from a small brass valve is magnified by a video camera and projected on a large screen. The close-up image reveals that the viewer and part of the room where they stand are visible inside each forming drop. The drop swells and shudders as it reaches surface tension, finally falling and creating a loud resonant sound as it lands on an amplified drum below. A new drop immediately begins forming and the cycle continues and is constantly repeating. 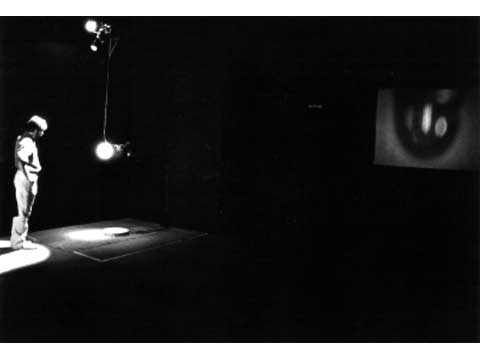 Bill viola chose the name ‘he weeps for you’ because in the bible, there are many passages that will say and that are similar like “He died for you”. He did this so that people could get the message that it has a religious meaning, being the relationship between people and god, which he means in any type of religion. He believes that “people are just the vehicles for the message from the universe” and that “we shouldn’t really worship the person like Christ for example, but we should really take his message in our hearts”. The art piece makes us feel a strong feeling between us and the universe and nature and a connection between them. As natural water drop drops from the top to bottom which symbolizes heaven and earth, and while being caught on camera which is a man made object this makes the viewer realize the relationship between us and the universe.