Why are the New Zealand school holiday dates being changed in 2011?

You may not have been aware of this, but the holidays are being changed!

This is not something that happens normally. The last time school dates were changed this much in New Zealand, was when we changed over from a three term school year to a four term school year, back in 1996!

New Zealand schools have had their term dates changed for 2011 so that the holidays at the end of term three happen as the same time as the final stages of the Rugby World Cup.

The Ministry of Education has told schools to change the dates of the terms. Terms one and two will be longer, and the fourth term shorter. The third term holidays will occur a fortnight later than normal and will run until Labour weekend near the end of October. Term four, which is when senior high school students sit NCEA exams, will be shorter by two weeks. Easter will be in the term one holidays.

The changes have been made to try to ease pressure on traffic flows and public transport during the final stages of the Rugby World Cup, particularly in Auckland which will host both semi-finals, the game to decide third and fourth place, and the final match. The quarter finals in Wellington and Auckland will be held in the first weekend of the third term holidays.(Two quarterfinal matches were scheduled to be played in Christchurch but these games were transferred to Auckland after the February 22nd earthquake.) Having the students on holiday will free up capacity on buses and trains, and will also take cars off the roads as children will not be being driven to and from school.

Some principals and teachers are unhappy about the changes, particularly given that teachers will have less time in term four to get students ready for final examinations.

Others, however, have said that with all the hype for the end the Rugby World Cup, perhaps it is just as well that children will be off school as they might struggle to concentrate on lessons anyway.

There have been mixed reactions from the general public. While some people have said that they think the changes are ‘no big deal’ and that ‘the kids will hardly notice’, others have been angry, seeing the changes as ‘New Zealand’s obsession with rugby over-riding children’s education.’

All state primary, secondary and area schools in New Zealand will have their dates changed, even in areas which are not hosting any Rugby World Cup matches. Private schools, which set their own term dates, can choose whether to follow the national term calendar or not. The principal of Rangi Ruru School in Christchurch, Julie Moor, had said prior to the earthquakes that her school would have its term three holidays a week earlier than the state schools.

What do you know about the Rugby World Cup?

A few things worth knowing about the Rugby World Cup


It’s now less than twelve months until the next Rugby World Cup. This article looks at the history of this event with some information about how the Cup got started and why it’ll be the biggest sporting event in the world in 2011, and the biggest event New Zealand has ever hosted when it kicks off on 9th September 2011. 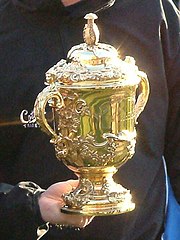 Did you know that the trophy for the tournament is called the Webb Ellis Cup? It’s named after a school boy William Webb Ellis who – according to the story – was the first to run forward with the ball in his hands during a football match at Rugby school in 1823. How true the story is is difficult to find out, but he’s the one who gets the credit for starting the game of Rugby Union as we know it today. When the first Rugby World Cup was organized in 1987 the cup was made in London by Garrard’s the jewelers and Webb Ellis’s name was chosen for the trophy. The cup actually isn’t solid gold, it’s silver with a thin coating of gold over the top. It might be interesting to think about why the trophy isn’t made out of solid gold (there are several reasons!)

One hundred years ago rugby was played at the Summer Olympic Games, but it was dropped from the Olympic programme in 1924. From that time on although different countries toured and played tests against each other, for over sixty years there was no formal competition to determine which was the best team in the world. In the 1980s Australia and New Zealand both tried to get a Rugby World Cup under way, and eventually when South Africa and France joined the call, the International Rugby Football Board (now the International Rugby Board, or ‘IRB’) approved the cup going ahead. The first Rugby World Cup was hosted by Australia and New Zealand, with the final played in Auckland. New Zealand’s All Blacks beat France to win the first Rugby World Cup, and New Zealand has not won the trophy again since then. The Rugby World Cup competition is held every four years. Australia and South Africa have both won the trophy twice, while England, like New Zealand, has won it only once. No other countries have won the Rugby World Cup.

At a Rugby World Cup twenty teams play in the opening group round of the championship. The twelve teams who did best in the previous Rugby World Cup automatically get to play in the current one. The other eight teams get there after qualifying by winning matches against other nations in their parts of the world. In the group round the teams are divided into four groups or ‘pools’ of five teams. The five teams in each pool all play each other, and the top two teams from each pool go through to the quarter finals. There are four quarter finals as these top team from each pool plays the runner up from another pool. The winners of these matches play in the semi-finals. The two teams that win their semi-finals play for the Rugby World Cup in the final, while the losing teams play off for third and fourth place. There are 48 matches played overall in the competition.

The Rugby World Cup is the biggest international competition in world rugby. Most rugby playing countries have domestic competitions between regional teams, but there are only two other major rugby championships between national teams: the Six Nations Championship between England, Ireland, Scotland Wales, Italy and France; and the Tri-Nations between New Zealand, Australia and South Africa. The Super Fifteen championship is another international championship, but it is not played by the countries’ national teams (like the All Blacks and Springboks). The Rugby World Cup is one of the biggest international sporting events in the world, behind the FIFA (soccer) World Cup, the Summer Olympics and the Tour de France cycling race.

The stands at Eden Park being rebuilt for the Rugby World Cup 2011
Because of its size, the Rugby World Cup is big business. There are special rules for who is allowed to advertise at the stadiums and companies bid to host the TV screening rights (because they will get money from advertising.) Hosting a world cup is very expensive. Countries which gain the right to hold a Rugby World Cup have to ensure that they have stadiums which are of a quality standard for the teams and supporters who will come for the event. The International Rugby Board insists that the final match has to be played in a stadium which has at least 60000 seats, which is why Eden Park in Auckland – venue for the 2011 semi-finals and final – has had to be upgraded. Cities and towns which will host Rugby World Cup matches also have to ensure that visiting teams and spectators will enjoy the experience, so transport systems have to be up to scratch as do accommodation and restaurant options.

While preparing to host a Rugby World Cup is very expensive, when the event begins all the teams’ supporters bring a lot of money into the country: they not only go to the games, but they stay in motels and hotels, eat out and enjoy themselves in bars and restaurants, and visit tourist attractions around the country. Millions of dollars in extra spending is generated by a successful hosting of an event the size of the Rugby World Cup, which greatly benefits the economy of the host country. As well as this, the leaders of the host country will try to make sure that visitors go home having enjoyed themselves, as they might come back again, or tell friends back home what a wonderful place they have visited. For this reason there is a lot of competition between countries to try to gain the rights to stage a Rugby World Cup. The decision is made at least six years in advance of the event happening: while New Zealand will host the 2011 championship, it has already been decided that the Rugby World Cup will be held in England in 2015 and in Japan in 2019.

Twenty four years have passed since the All Blacks won the first Rugby World Cup. For the first time since then New Zealand will also host the competition in 2011. At the last event in 2007 the All Blacks didn’t even make the semi-finals, the only time that they haven’t done that. The All Blacks are very keen to wipe out the bad memories of 2007, and there is a sense that maybe playing this World Cup at home, New Zealand might at last be able to lift the Webb Ellis trophy again at Eden Park.