Decision making involves exploring plausible alternatives to a problem and choosing the one that will work best.Six simple steps in decision making are:
1. Creating a constructive environment(Do this by deciding your objective clearly, involving the right people, deciding on the way the decision will be taken)

Some Models in Decision Making

A certain school has to buy some technological devices for their Audio Visual Aids Room.Four tenders from different dealers are put forth before the school committee. The school has to decide who to place an order with. The grid is made by putiing the four names as heads of rows and various factors to be considered as the heads of columns. Each is rated as 0 for very poor to 5 for very good.Each score is multiplied by the weight accorded to each factor. The weighted scores are added to make a decision.

The above grid makes it obvious that ABC tech ought to get the contract.

PMI stands for Plus , Minus , Interesting. Under Plus , note down all advantages of taking a decision, under Minus note all the disadvantages and under Interesting note down possible implications of the action. Assign scores to each point noted. Scores could be positive or negative. Add the scores. A high positive score means the action needs to be take.A negative score indicates the action is best avoided. Look at the example provided.


A certain school has to decide whether to hire a curriculum consultant or not. The consultant is expected to help the school formulate a curriculum, implement it, train teachers to apply the curriculum.

The total score is +9 . Hence hiring a consultant will be a wise decision.


Method:
The plan or proposal is put in the middle. Favourable forces are listed on one side and non favourable forces on the other. Assign scores for each factor starting with 1 for weak and 5 for strong.


Example: A certain educational institution is planning reduce the strength in each class from 40 to 30. Is the decision worth taking? 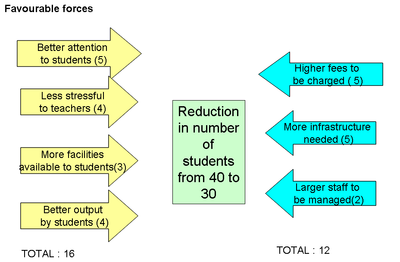 As seen from the above Force Field Analysis, factors not in favour total to 12 whereas factors in favour of change total to 16. Hence the decision is good enough to be accepted.