This piece of art was a video installation that lasted approximately 18 minutes, it was done by Alex Monteith in 2006. The video was projected onto a wall and was about 16meters x 2.8meters in size.

The video was done in collaboration with Lloyd Bishop who was a championship dog-trialist. He used these skills to move the sheep from left to right. 'The sheep are navigated into the centre frame of each of the four simultaneously recording DV cameras. The recordings are stitched together to form 4 panels comprising a seemless view of the hillside. The mustering performance is continuous with no cuts-meaning the muster had to be performed perfectly with no retakes from start to finish.' (http://www.alexmonteith.com/work_detail.php?id=78#)

Video Of the Installment 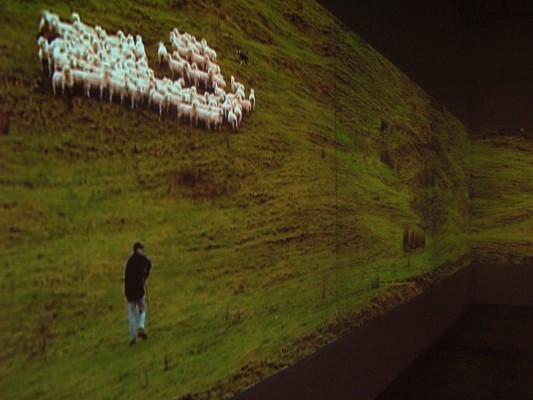 She was Born in Belfast, Northern Ireland in 1977 and then in 1987 she moved with her family to Palmerston North in New Zealand. She majored in photography at Elam School of Fine Arts which she completed in 2001 and also succeeded at achieving an MFA in Intermedia and the time based arts which she got at the Elam School of Fine Arts in Auckland. Between 1999 and 2012 actively involved in art discourse through exhibition, panel discussions and gallery floor talks (art galleries, film festivals, TV and radio both nationally (NZ) and internationally).' (http://www.alexmonteith.com/biography.php)