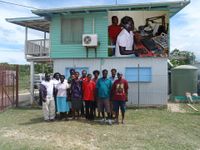 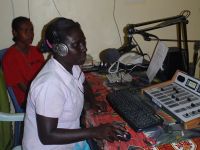 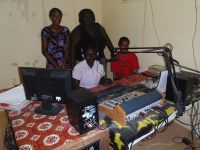 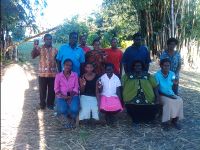 The Bogenvil Meri Tede (Bougainville Women Today) concept was developed at the programme design workshop held at the Kuri Village Resort, Buka Bougainville, PNG, 7-10 September 2010. It was organised by New Dawn FM in association with participation from the Ministry of Community Affairs, Bougainville Hospital, Bougainville Inter-Church Council, CARE International, NBC Bougainville, with sponsorship and training by the Commonwealth of Learning and the Regional Media Centre of the Secretariat of the Pacific Community.

BMT is a community learning programme focusing on women's health. The programme is under the COL's Healthly Communities. The detailed programme guide can be downloaded below, which features the message and programme matrices. The radio programmes have been produced and are currently being broadcast every Wednesday evening on New Dawn FM.

We started talking about establishing a community radio station in Bougainville around 2000 and decided we would call it New Dawn FM to mark our optimism about the future of the Autonomous Province of Bougainville following a terrible civil war that left countless thousands of people dead, injured or internally displaced.

Initially, New Dawn FM broadcasts to the many towns and villages in the Tinputz and Buka Passage area of north Bougainville. The locally owned and managed radio station would not only provide an independent news, information, education and entertainment to listeners, but also be a model for the possible establishment of community radio stations elsewhere.

We believed the project would contribute to establishing a public sphere of community discourse, enabling discussion and giving a voice to a community dispossessed by civil insurrection and seeking to rebuild a democratic society.

The talk continued and reached a lunch table in Sydney, Australia, where our Board member Carolus Ketsimur met his old Papua New Guinea broadcasting buddies Phil Charley OAM and Keith Jackson AM. They sought the assistance of Assoc Prof Martin Hadlow of Queensland University, himself formerly a radio station manager in PNG and a senior UNESCO executive.

Together we developed a concept that saw UNESCO and the German Government provide funds for studio equipment and a transmitter. After a number of false starts, we finally started testing the station in April 2008. Then, at the end of June, our transmitter was destroyed when strong winds damaged the telescopic mast. We paid for another and a standby transmitter and went on back on air in November 2008.

We are now on air with a transmitter power of 300 watts. Since our establishment we have covered the Bougainville Presidential by-election and also the celebrations of the inauguration of the second Autonomous Bougainville Government. This was done in Arawa in Central Bougainville and we covered it live for listeners in the north.

The Government was very impressed and gave us budget support with initial funding of 50,000 kina, which will be increased later this year. We have so far secured more than ten sponsors for our programs who are paying K500 per program per month and still more are coming forward.

We get about 500 test messages a day for requests and other information from our listeners and this is very encouraging as they participate daily in our shows.

Workshop on Introducing Mobiles into Community Learning, Buka, May 23-25, 2011

This workshop is based on a module from the Toolkit developed by COL's Training division.

Activity 1 : How people use mobiles locally

Activity 2 : Examples of how mobiles are used in learning for development

The activity is described in the workshop schedule above.

The activity is described in the workshop schedule above.

Create local Wi-Fi hotspot for ABG with all the information needed by Members, so they can access by laptop and mobiles, can include podcasts, audio as well as HTML and PDF format information

Maureen from the CARE office worked on this idea for using mobiles in learning.

Each Wednesday, New Dawn FM broadcasts a learning programme in the BMT series. They will use FrontlineSMS to build a database of interested listeners (learners) and invite people to respond to quizzes.

New dawn plan to gain experience with the technology and managing costs initially, then to start trials supporting the BMT series.

The station also sees it's role as a training hub, to support their partners in their training needs, and assisting them in implementing the ideas listed above.

A demonstration of Google Groups and WikiEducator was given to the participants. Most participants had no experience of email. In this session the following was completed:

Feedback and Information on progress

New Dawn FM did a test of their FrontlineSMS system to see how well it works technically, and to get an indication of the effectiveness of the mode and how well it can engage with listeners. The test involved sending auto-replies with updates on the elections that were on-going at the time. Over 3 days the election counting is being carried out, People in rural areas are very interested in up to the minute updates. So New Dawn radio announced that listeners could SMS in with keyword UPDATE. The auto reply was updated repeatedly as results came in.


In the first night New Dawn received over 800 requests for updates, and thus they have proved the system really works well and will provide an effective way of reaching and engaging with listeners, and especially people involved in learning programmes.


Cost will be an issue. 800 SMSs sent in peak hours would cost 200 Kina (USD 50). In the case above, most requests were received during the night when the rate is reduced to almost free. The strategy will be to (a) investigate sponsorship for the service (i.e. the election results sponsored by candidates) and also use of premium numbers (i.e. they can earn revenues from the services) and (b) to seek short code free phone number from the providers.