Nova Scotia Gambia Association has two media units: one in The Gambia and an other in Sierra Leone. We Shoot , edit and produce our own health education DVD's on diverse topics that are shown on Large Projector screens in communities and towns in both countries. These tools developed are also made available to other partners . Added to that we produce , present a 30-minute radio programs that are distributed to local stations for airing

In Sierra Leone we were able to set up a 100-watt FM radio station in the north of the country that broadcasts in a widely-spoken local language in that area. This station is accessible to our own peer health educators . We also train youths on the use of media equipment. Support also goes to The Freetown Teacher College distance education program, through the establishment of a unit and training of their personnel. 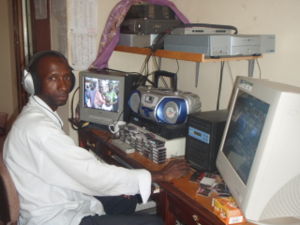