Organelles are the “little organs” of the cell - like the heart, kidney and liver are the organs of the body. They are structures with characteristic appearances and specific “jobs” in the cell. Most can not be seen with the light microscope and so it was only when the electron microscope was developed that they were discovered. The main organelles in the cell are the ribosomes, endoplasmic reticulum, mitochondrion, Golgi complex and lysosomes. A cell containing these organelles as seen with the electron microscope is shown in diagram 3.3.

Ribosomes are tiny spherical organelles that make proteins by joining amino acids together. Many ribosomes are found free in the cytosol, while others are attached to the rough endoplasmic reticulum.

The endoplasmic reticulum (ER) is a network of membranes that form channels throughout the cytoplasm from the nucleus to the plasma membrane. Various molecules are made in the ER and transported around the cell in its channels. There are two types of ER: smooth ER and rough ER.

Smooth ER is where the fats in the cell are made and in some cells, where chemicals like alcohol, pesticides and carcinogenic molecules are inactivated.

The Rough ER has ribosomes attached to its surface. The function of the Rough ER is therefore to make proteins that are modified stored and transported by the ER (Diagram 3.11). 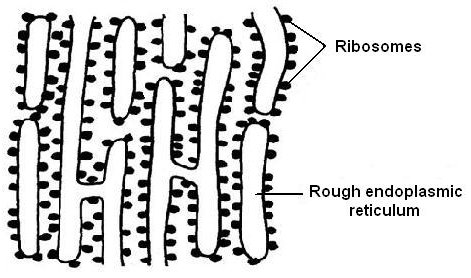 Mitochondria (singular mitochondrion) are oval or rod shaped organelles scattered throughout the cytoplasm. They consist of two membranes, the inner one of which is folded to increase its surface area. (Diagram 3.12)

Mitochondria are the “power stations” of the cell. They make energy by “burning” food molecules like glucose. This process is called cellular respiration. The reaction requires oxygen and produces carbon dioxide which is a waste product. The process is very complex and takes place in a large number of steps but the overall word equation for cellular respiration is-

The Golgi bodies in a cell together make up the Golgi apparatus. Golgi bodies are found near the nucleus and consist of flattened membranes stacked on top of each other rather like a pile of plates (see diagram 3.13). The Golgi apparatus modifies and sorts the proteins and fats made by the ER, then surrounds them in a membrane as vesicles so they can be moved to other parts of the cell.

Lysosomes are large vesicles that contain digestive enzymes. These break down bacteria and other substances that are brought into the cell by phagocytosis or pinocytosis. They also digest worn-out or damaged organelles, the components of which can then be recycled by the cell to make new structures.