The nucleus is the largest structure in a cell and can be seen with the light microscope. It is a spherical or oval body that contains the chromosomes. The nucleus controls the development and activity of the cell. Most cells contain a nucleus although mature red blood cells have lost their's during development and some muscle cells have several nuclei.

A double membrane similar in structure to the plasma membrane surrounds the nucleus. Pores in this nuclear membrane allow communication between the nucleus and the cytoplasm.

Within the nucleus one or more spherical bodies of darker material can be seen, even with the light microscope. These are called nucleoli and are made of RNA. Their role is to make new ribosomes.

Inside the nucleus are the chromosomes which:

In cells that are not dividing the chromosomes are very long and thin and appear as dark grainy material. They become visible just before a cell divides when they shorten and thicken and can then be counted (see diagram 3.14).

Diagram 3.14 - A cell with an enlarged chromosome 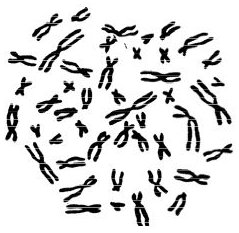