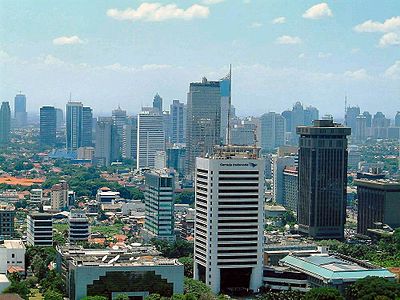 Jakarta, capital of Indonesia. Since gaining its independence after World War II, Indonesia has had a turbulent time. It is an important state within its region and is a founding member of ASEAN and the East Asia Summit.

After the cessation of the Second World War, Asia was a region marked by intense decolonisation and nation-building.

New nation-states were created during this time, sometimes marred by conflict over competing territories, interests and ideologies. Alongside this process of nation-building has been an increasing acceleration of contemporary globalisation. At various times, this has led to both challenges and problems arising throughout Asia.

In more recent years, Asia has become a hub of manufacturing as multinational corporations have set up manufacturing plants and factories across the region. This has both positive and negative effects as often alongside increased economic prosperity for some has come increased wealth disparity, changes to society and culture and a polluted environment, just to name a few. These changes can sometimes cause widespread societal discontent, all of which are factors that can threaten political, national and regional stability.

Your readings for this section should first provide you with an historical evaluation of the regional relations across Asia. By beginning at the end of World War 2 you will be able to examine the process of nation-building experienced by many Asian states that gained independence after the war. For some states, independence involved fierce conflict with European powers after World War 2 had ended. It was not a neat handover of power.

You should also look for sources that examine the formation of regional and sub-regional groupings across Asia. This may include groupings formed to shield Asian states from the Cold War, or it could involve groups of states coming together to improve their economic advantage. Here you should reflect on what you studied in the unit on Regional Economic Imperatives for the Asia and the Pacific regions.