European views of the region 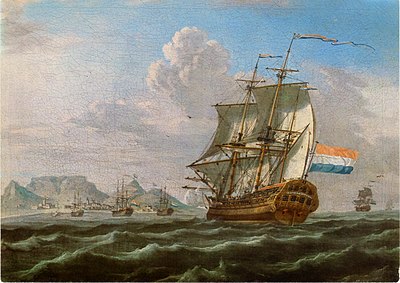 An oil painting of the Noord-Nieuwland in Table Bay, circa 1762. This ship was part of the Dutch East India Company (VOC) fleet. The VOC was the world’s first multi-national corporation and they set about to colonise much of Asia during the height of their power.

Early views on the Asia-Pacific region

In the 18th and 19th centuries, a number of factors influenced how Europeans viewed the Asia-Pacific region.

The Europeans had diverse views on the landscape and people living in the Asia-Pacific. While these views influenced how Europeans approached the region, many of them has their roots in the early works by the geographer Ptolemy, reflecting that they pre-dated the 18th and 19th centuries period.

Ptolemy was instrumental in introducing the notion of Asia and the Pacific being a fantastic and exotic location, rather than viewing it as an equal region to his own. This led to the Asia-Pacific region being encompassed by romanticised views, including later notions espousing the 'noble savage' concept.

The underlying value positions that reinforced the pattern of European interaction in Asia and the Pacific have included primitivism, progressivism, Christianity, geographic determinism and finally, scientific empiricism. Again, like Ptolemy's (and others') views of the region, these value positions served to reinforce notions of Asia and the Pacific not being equal to Europe and European powers. This led to very destructive forms of colonialism and European imperialism to dominate the interactions of the Europeans with many of the peoples, societies and states that comprise the region.

Some of these value positions still sometimes influence, to varying degrees, contemporary interactions in the region. Therefore, it is important that we identify, examine and evaluate the perceptions held by Europeans in the region, in both historical and contemporary times.

Based on your research of these terms, share your personal thoughts and reflections related to the historical connections of Europe in the region by posting on WENotes below. Examples of your post:

(Visit the course feed to read comments from participants)

Your self-directed reading for this Module should see you explore European perceptions of Asian and Pacific landscapes and peoples. This examination is more likely to be a broad overview, although you may be able to locate sources specifically on a particular country or group of countries. You should also locate sources on European interactions with the indigenous populations across the Asia-Pacific region. Here you could examine a country or a group of countries in-depth, rather than a broad overview. Finally, you should think about and evaluate whether or not there has been a persistence of 18th century attitudes and values concerning the Asia-Pacific in the contemporary era. By the completion of this Module, you should have considerable knowledge on the patterns, impacts and persistence of European presence in the Asia-Pacific.