In order to dispel any new myths which may or may not arise, I feel that I should document some of WikiEducator's early history.

Determining the inception date of WikiEducator is open to interpretation. I took up my current role at COL on 1 May 2006, leaving my previous position as Associate Professor and founding Director of the Centre for Flexible and Distance Learning at the University of Auckland.

I mention this because I was intimately associated with New Zealand's global leadership role in moving the implementation of free software in education forward through the vision of the Tertiary Education Commission's eLearning Collaborative Development Fund (eCDF). This is the fund which supported the foundation of Eduforge, the NZ Open Source VLE project and other open source projects. I had privilege of being the founding project lead of another eCDF, free software project called the eLearning XHTML editor (eXe), which has developed an authoring tool for educators to package interoperable learning content. The eXe project was successful in securing two sizable grants from the eCDF.

New Zealand's role in furthering the global implementation of free software in education will not go unnoticed. The first large-scale enterprise implementation of a free software Learning Management System took place at the Open Polytechnic of New Zealand. This was the direct result of the foresight of the eCDF and a few pioneers from New Zealand who had the courage to pursue substantive government funding because of a deep seated commitment to the values and potential benefits of open source software in tertiary education. These individuals challenged organizational orthodoxy, notwithstanding the Fear Uncertainty and Doubt (FUD) typically found in the higher education sector. External funding is a powerful catalyst that helps mitigate against organizational stagnation and very often, unfounded perceptions of emerging futures. It's an open question, but, would the British Open University, Athabasca University and others have gone with their decisions to implement the Moodle open source software, LMS without New Zealand's significant contributions to the code engine of Moodle combined with a concrete example of its implementation in a large-scale distance education institution?

Getting back to the inception date of WikiEducator, in preparation for my move to COL in Vancouver, I set up a prototype installation of WikiEducator on a desktop machine before moving this over to a centrally hosted server financed by COL which was installed shortly before my arrival at COL. Because history is important, I kept all the file history of this early desktop prototype when we moved it over to a hosted solution in April 2006. The very first edit I made on the desktop prototype was 13 February 2006. At this time I was testing Mediawiki as our preferred technology choice under some tough competition from MoinMoin, the Python based wiki. The WikiEducator prototype was not linked to a domain name server until April, and was simply an unpublished local IP address.

Reflections on choosing the domain name

I registered the WikiEducator domain name on 12 February 2006 in New Zealand, which was not put into production until April 2006 when we moved the prototype onto a hosted server. There has been some discussion on the blog sphere with Leigh Blackall's request for WikiVersity and WikiEducator joining to make WikiLearner.

I had one primary requirement for the choice of domain name, namely that it had to be available under all of the .org, .net and .com domains.

My first choice was Wikilearn, which I felt encapsulated the spirit of I was hoping to achieve. However this was not available at the time under all three domains. I did not want to associate the domain name with an organizational entity like "university" or "school", largely influenced by criticisms of the academy levelled against the fledgling Wikiversity project which was establishing itself under Wikibooks. I settled for WikiEducator as a compromise. Given my disappointment in not finding Wikilearn available under all three domains, I went for WikiEducator which I felt was more representative of our the intentions of collaborative authoring of free content at the expense of paradigmatic preferences for learner centered pedagogy. Anyway, that's history. In hindsight, Wikilearner was available at the time - but I felt that a wiki called "learner" as opposed to "learning" might not attract educators in authoring free content. Interestingly, Wikilearner.com was registered in May 2006, 10 days after the inception date of WikiEducator. (I don't suggest any connection with the registration of Wikilearner and our work on WikiEducator.)

Taking this history into account, I like to use 1 May 2006 as the official inception date of WikiEducator which coincides with my first day at COL, but this is open to interpretation. COL provided the funding support for nurturing the growth of WikiEducator during is foundation years, but we are proud of New Zealand's association and leadership in open source software in education in conceiving the WikiEducator project.

Prior to taking up my position at COL, I requested that the WikiEducator url be printed on my new business cards. At the time, my request was refused. I can only speculate that the wiki concept was still very new to the organisation and prudence prevailed rather than promoting an "untested" technology. However, during the first VUSSC Bootcamp, COL headquarters requested that a clear notification of COL's support for the technology be acknowledged on the WikiEducator site. COL's logo and footnote was inserted on 17 August 2006.

I should point out that I seriously considered joining forces with Wikiversity in the early days before "going it alone", so to speak. This was when Wikiversity was still under the Wikibooks project as evidenced by this page I set up in Wikibooks on 27 June 2005. I was invited to speak at the first Free/Libre Open Source Software (FLOSS) and Free Knowledge Workshop, initiated by Kim Tucker of the Meraka Institute. This is where I first met Erik Möller (more popularly known as Eloquence in the wiki community) who, was Chief Research Officer of the Wikimedia Foundation at the time. Erik spoke passionately about the potential of the wiki model for education and I decided then that if I were ever to set up an educational wiki, Eloquence would be the first person I would approach for hosting services. As things turned out, Erik hosted the WikiEducator servers during our formative years and has been a pillar of support advising us on technical matters. It is refreshing to observe and experience how the free culture movement can collaborate across projects.

Reflecting back on my decision to facilitate the emergence of a new community from scratch -- considerably more difficult than joining an existing community -- the following factors informed my choice:

In hindsight, this was the right decision. Both projects have had the space to grow, mature and differentiate themselves, while working towards the common ideal of free content development for education. There have been an increasing number of discussions on the similarities and differences between the respective projects which is welcomed by both communities. (See for example my responses to a question from a community member). This hidden talk page attracted meaningful interactions between Wikiversity and WikiEducator, and is a testament to the open approach of free content communities.

Polularised by Mark Twain, we know that there are three kinds of lies: "Lies, dammed lies, and statistics".

On the verge of WikiEducator's first birthday in April 2007, we had logged about 2.3 million hits. During April 2007, we were ranked by Alexa as the 354,568 most visited website. That put WikiEducator within the top 8% of websites on the planet. Not bad performance or a small wiki working on the development of free content for education, especially when considering that there are approximately 48 million active websites in the world (according to Netcrafts 2006 figures). The statistics for March 2006 show an average of 20 000 hits per day from approximately 900 visits. During April 2007, we were recording visits from 61% of the 193 countries in the world. It's phenomenal to consider that WikiEducator now generates in excess of 10 million hits a month (October 2009) and has improved its rankings to a top 100K site on Alexa. 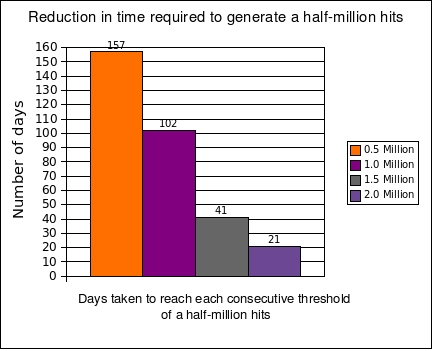 An interesting way to look at WikiEducator's early growth is to compare the number of days it has taken to reach cumulative totals in steps of a half-million hits. It took WikiEducator:

These interactions have encouraged WikiEducator to think critically about its evolving vision. Particularly with regards to how it differentiates itself from similar projects. Given the magnitude of our collective task to develop a free curriculum by 2015, we cannot afford duplication of effort. Where things stand at the moment -- taking into account that WikiEducator is a dynamic community -- I think the project differentiates itself in the following ways: