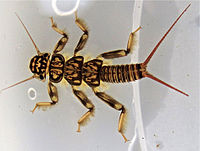 Paragnetina have 3 ocelli (spots) on the back of their head. Like the other Perlidae, there are highly branched gills located on the sides of the thorax. The dorsal sides of the abdominal segments have small hairs on lateral portions but not in the center of the segment.