From WikiEducator
< VirtualMV‎ | Internet and Web‎ | History and Future
Jump to: navigation, search

Also to show advances in software: Miku 39 is a virtual Performer projected on a large glass screen performing with a live band, voice as well as image all computer generated. http://www.youtube.com/watch?v=-dd4HqNOA4U

The Internet has had a relatively brief history. It grew out of an experiment begun in the 1960’s by the U.S. Department of Defense’s Advanced Research Project Agency (ARPA). They wanted to create a computer network that would continue to function in the event of a disaster, such as a nuclear war. If part of the network were damaged or destroyed, the rest of the system still had to work. In 1962 Paul Baran of RAND Corporation published "On Distributed Communications Networks" which introduced Packet-switching (PS) networks; no single outage point. In this system packets of data are individually addressed and transferred from node to node, with none of the nodes being more important than any other.

In 1969 a trial network, called ARPANET, was launched. To begin with there were 4 nodes or hosts, all super-computers at U.S. universities. Researchers at each institution could send data to each other and remotely control each other’s computers. Gradually through the early 70’s more hosts were added (see table 2.1.). In 1971 Ray Tomlinson developed email. In 1975 ARPANET had proved to be so successful that it was converted from an experimental network to an operational one.

Although ARPANET was supposed to be used for long-distance computer research, it quickly became apparent that most of the traffic was actually made up of messages sent from researcher to researcher. While many of the messages were notes about long distance networking, such as suggestions for improving the software and hardware of the network, they also included news, gossip and discussion about hobbies. From the beginning, the culture of the Internet, and the collaborative procedures for running it began to evolve.

ARPANET’s original standard for communication was known as Network Control Protocol or NCP. As more and more hosts were added through the 70’s, it became apparent that NCP would not be able to handle indefinite expansion. Researchers began to work out a new protocol that would allow billions of hosts to be added. This higher-level, more sophisticated standard was called TCP/IP.

By the late 70’s many other networks of computers had been created, all linked to ARPANET using the TCP/IP protocol. Around this time the whole thing began to be called the Internet.

In 1983 the original military segment of ARPANET broke away to form MILNET. One of the other networks was NSFNET, a series of networks for research and education communication created by the US National Science Foundation (NSF). In 1985, the NSF began to upgrade their national network – it was much faster than ARPANET so it took over the duty of the backbone of the Internet. At the same time, many regional networks were created to link individual institutions with the national backbone service. In 1989 ARPANET was finally retired. 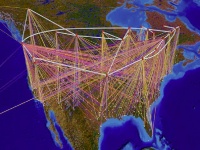 The Internet grew rapidly in the late 80’s and early 90’s as people discovered its potential, and as new software applications were created to make access easier. In 1991 NSF lifted its ban on commercial traffic on its network and Corporations began to link their own networks to NSFNET.

In the early years of the Internet all navigation was by text-only computer commands, making it difficult for the non-programmer to understand. However in 1991 Tim Berners-Lee of CERN released the hypertext system, which allowed links to be made from page to page, and images to be included in pages. This system, called the World Wide Web really took off when the first easy to use browser, called Mosaic, was released by NSCA in 1993.

In 1993 the NSF set up a service called InterNIC, which registered all addresses on the Internet so that data could be routed to the right system.

Gradually commercial firms and other regional network providers took over the operation of the major Internet arteries from the NSF. Similarly Internet software was increasingly released by commercial firms, instead of as a result of collaboration by academics. As the WWW became more commercialised and easy to use, and as more multimedia applications became available, so its popularity exploded 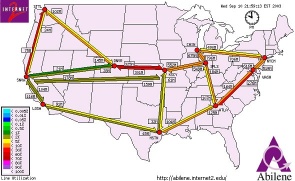 Comparison of speeds: Downloading the DVD Movie "The Matrix"

Japan has the world's fastest Internet connections, and delivers more data at a lower cost than anywhere else in the world. In fact, broadband service in Japan is between eight to 30 times faster than in the United States and much less expensive. Faster Internet speeds in Japan, South Korea, and much of Europe will lead to Internet innovations that are likely to remain unavailable in the United States for many years. The high Internet speeds in Japan allow Internet users to watch broadcast quality, full-screen television over the Internet while all most Americans can access are wallet-sized, grainy images. Other Internet applications in Japan currently unavailable to Americans include low-cost, high-definition teleconferencing, which has been used by doctors in urban areas to diagnose patients, and advanced telecommuting. Analysts say Japan's advancement is largely due to better wire and more aggressive government regulation. In 2000, the Japanese government compelled its large phone companies to share wires with startup Internet providers. As competition grew, the cost of broadband in Japan fell by about half and broadband speed increased 33-fold. In 1996, a similar measure to allow access to phone company lines was strongly endorsed by Congress, but federal support fell through in 2003 and 2004 when the Federal Communications Commission and a federal court ruled major companies do not have to share phone or fiber lines with competitors, and the Bush administration did not appeal the decision. "The Bush administration largely turned its back on the Internet, so we have just drifted downwards," says former U.S. diplomat to Japan Thomas Bleha. (Harden ,2007, August 29)[9] 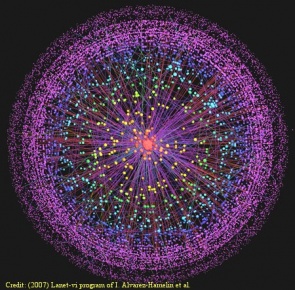 The shape of the online universe

The shape of the online universe. This image shows the hierarchical structure of the Internet, based on the connections between individual nodes (such as service providers). Three distinct regions are apparent: an inner core of highly connected nodes, an outer periphery of isolated networks, and a mantle-like mass of peer-connected nodes. The bigger the node, the more connections it has. Those nodes that are closest to the center are connected to more well-connected nodes than are those on the periphery. Image Credit: Lanet-vi program of I. Alvarez-Hamelin et al. (Proceedings of the National Academy of Sciences) Graham-Rowe, D. (2007, June 19) Mapping the Internet Routing traffic through peer-to-peer networks could stave off Internet congestion, according to a new study. Retrieved June 21, 2007 from http://www.technologyreview.com/Infotech/18944/ 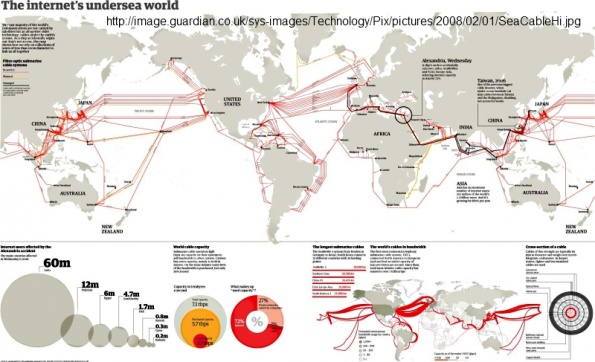 How The World Spends Its Time Online (visualeconomics, 2010)[15]

What Happens In An Internet Minute? 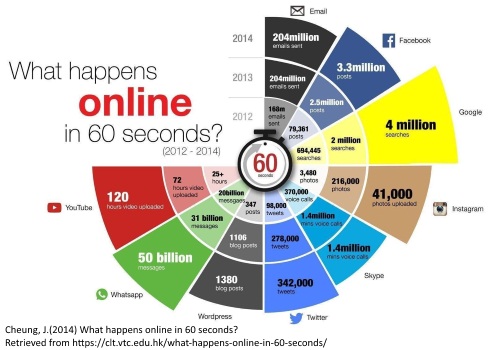 The Internet is growing exponentially. It doubles in size every 18 months. The table below shows the growth of the Internet, measured in the number of hosts, i.e. the number of unique IP addresses registered.

In the NZ Internet E-commerce Outlook report (IDC) Feb 2000, the number of Kiwis with internet access were estimated at 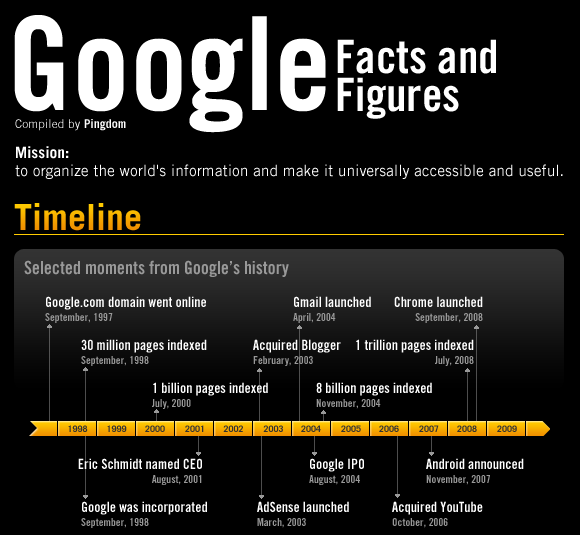 6 Predictions for the internet

6 Predictions about the internet

Six quirky Predictions about the internet, Would be interesting to see these come true.

History of the Australian Web (Graphical)

Comments for the page

Hey, the page looks a bit chaotic. But that doesn't hurt. You've certainly got me thinking. That tiki-toki tool is interesting. I keep thinking about how to displays parrallel evolutions.

I'd tend to ask students to do "their" version, after assembling a few more interesting perspectives. This one might be useful. http://en.wikipedia.org/wiki/Regional_Internet_registry It tends to break down the belief that the internet is some cohesive thing.

The "evolution of html" is obviously still too close to the top. Tim berners lee's proposal for the www being in 1990. http://www.w3.org/Proposal.html As he said ""I just had to take the hypertext idea and connect it to the Transmission Control Protocol and domain name system ideas and—ta- da!—the World Wide Web." http://en.wikipedia.org/wiki/Tim_Berners-Lee

So maybe some background on the history of hypertext may be an idea. This one's not real good. http://en.wikipedia.org/wiki/Hypertext

You might also want to bring "the internet" down to a local level and ask students, "so which network do we use to connect to the Internet in this classroom?". That should get a few brain cells twitching. (Just so you're a chapter ahead. It's http://www.karen.net.nz/ at your end)

Do us a favour. I'm not based anywhere. Been travelling for the past 18 months. Europe last year. Asia this. Thailand today. Please don't "consider a separate part for other countries". I spend most of my time trying to get NRENs to collaborate. They don't. They compare. That's why OERers end up having to cobble together tools like this google group, with a wiki (in our case). AsiaPac doesn't have an (active) association for NRENs. But the euo based one is not bad. http://www.terena.org/activities/media/

Government and education are the only two industries which can't adapt to a globalized world. They just can't get past their national borders. I won't rave on here as I want to start at wayne's critical point - ".. a ludicrous situation where taxpayers are frequently required to pay twice for their learning materials."