4. The process of communication

Communication can be very complex, as there are countless opportunities for sending or receiving the wrong message. You may think you understand a tourist’s request only to hear, “But that’s not what I meant!” You may also have received or given directions you thought were clear, yet still, you lost your way or misled someone in the process. In order to understand the complexity of the communication process you have to be familiar with the following terms we refer to as elements: 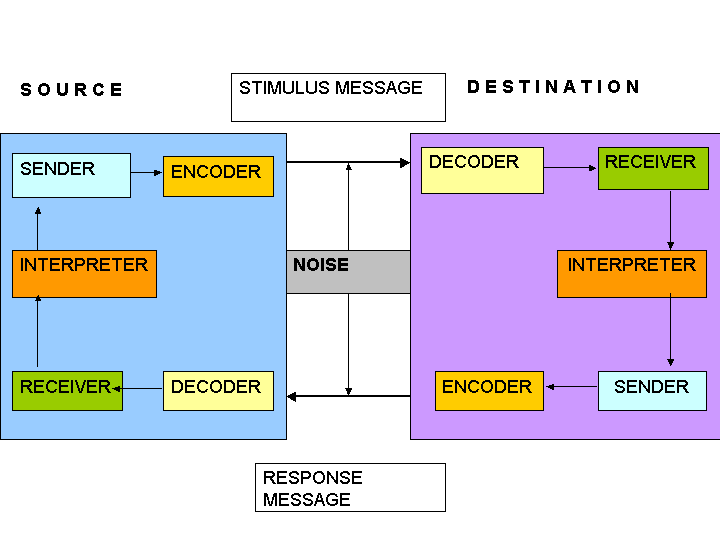 The descriptions that follow will help you understand the above diagram.

Sender: A person sending a message to another person. This person begins the communication process. The sender has a responsibility to formulate a message that will communicate exactly what he/she means. This involves the use of communication symbols that will convey this meaning. The sender in tour guiding operations can be both the tour guide who presents tour commentaries and explain attractions, and the tourists who ask questions or make comments.

Receiver: The receiver is the person (for example the colleague or tourist) to whom the message (or communication) is directed. In tour guiding it can both be the tourists who are being addressed by the tour guide, or the tour guide receiving questions from the tour group.

Message: The reason for the communication process. It is the idea or information that the sender wants to pass on to the receiver. This is the encoded set of symbols that is conveyed by the sender and which consists of both verbal and non-verbal symbols that the sender wishes to transmit. The sender must formulate the message with clear language or symbols which will be easily understood by the receiver and which the receiver will be able to interpret accurately and respond to. The sender should also provide room for feedback in the message.

Channel: The channel is the medium through which the message is sent – for example whether it is sent verbally (by word in face to face or telephonic conversation), written (by writing such as memos, letters, faxes, e-mail) or signaled (by hand or other symbols). The channel carries the message from the sender to the receiver. In tour guiding operations the channel can be both verbal (for example tour commentaries or tourist questions), non-verbal (the tour guide or tourist’s body language supporting the messages) and print and electronic media (newspapers, television, internet, magazines, maps and brochures used to develop the tour guide’s commentaries).

Then there are four communication techniquess and these are:

Decoding: Decoding is when the receiver interprets the message and its meaning. Decoding is the process by which the receiver translates the symbols or words of the message into information that is meaningful to themselves. The process and success of decoding can be influenced by several factors, including a difference in perception and experiences between the sender and the receiver, as well as their different attitudes and what they already know about the topic of the communication. Different receivers could decode the same message differently, because of each one’s unique perception.

Responding: This is when the receiver or even the sender of the message performs an action and responds to the message received.

Feedback: The message has an effect on the receiver in terms of how they think it was intended, and they give a response (reaction) back to the sender based on the meaning they attach to the message. This response is called feedback. The feedback can be verbal, written or non-verbal. Even silence is non-verbal feedback, although it is often hard to interpret and can be misunderstood because it can either mean indifference, acknowledgement or a lack of understanding of the message. Because of all the different ways silence can be interpreted, this is known as negative feedback. It is important for tour guides to design feedback methods in a way that would encourage understanding and positive feedback. These can be done by encouraging comments and questions from tourists during a tour and feedback questionnaires or other evaluation methods following a tour.

The last element is a factor that can hinder the process at any stage, and that is noise.

Noise: As we have already seen, noise hinders effective communication throughout the communication process. Noise can be from the external (surrounding) environment, such as from too many messages at the same time or background noise that interferes with a clear understanding of the message. We also refer to some receiver characteristics as ‘noise’, and this is where their emotions, ethnic background, age, education level or disabilities may distort or make a message misunderstood. Noise in communication, is any distraction that interferes with the proper transmission of communication, so that the message from the sender cannot reach the receiver as it was intended by the sender to be understood. It is a major communication barrier, as we will see further on in this discussion. In tour guiding for example, noise can be the background sounds of animals at a site while the tour guide is explaining the attractions. It could also be the accent of the local tour guide, which may make it difficult for the tourists to understand the message he/she is trying to convey.

Do you know the saying, "Communication is as much a matter of human relationships, as it is about transmitting facts"? Well, this is particularly true in tour guiding. How do we know when communication is effective? It should contain most of these features: