Identity theft is the crime of stealing an individual's identity. Personal information such as one's social security number, credit card number, and bank account numbers are the most likely to be compromised during identity theft. If this information falls into the wrong hands, all of the victim's assets can be accessed. The severity of identity theft varies greatly from one extreme to another. Often, it ends with the criminal stealing money. In rarer cases, a victim's entire identity is stolen and used to incur huge amounts of debt and commit crimes. If the victim's credit report is affected, it may be difficult to secure a loan or buy a house in the future. There have even been cases when a victim of identity theft has been imprisoned due to the criminal's actions. The victim is left feeling hopeless since it is difficult to prove that he/she is a victim of identity theft. To make matters worse, the costs involved with rebuilding a reputation are often higher than the amount of money stolen. 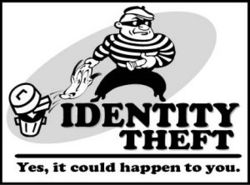