User:Vilimaka/Climate change and the Pacific Islands

The Pacific Islands consist of many islands that scattered across the Pacific Ocean. Some of these islands are big and high but most are small and low-lying atolls and are barely a few metres higher than the high-tide mark.

Recent changes in the Pacific

Society is changing in response to events that are happening in the environment. And one of the most effective and responsible avenue for responding to events in our environment is through education 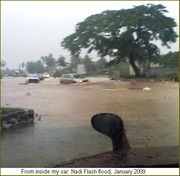 (both formal and informal). For example, formal education (teaching, learning, and the curriculum) is ever changing in response to many global challenges. Be it the challenges of the 9/11 in the US or those that were experienced by the people of western Viti Levu, Fiji, as a result of the flash floods in January 2009, the response of education is a reflection of society’s aspiration for a better world.

Many Pacific Island countries are already feeling the impact of global warming and climate change. Here are some of our recent experiences:

On Majuro atoll in the Marshall Islands, the airport has flooded several times, despite a two-metre seawall. In Tuvalu and Kiribati, surges over seawalls, causeways and roads are commonplace. The islets of Tebua and Bikeman off Tarawa atoll in Kiribati have vanished (Moore, 2002).

We love living close to the sea, but with frequent tidal surges, the tide has reached many peoples' pig-styes and toilets. Over the past decade, malaria has broken out in the highlands of Papua New Guinea

At Pangai, Ha'apai, Tonga: High tide reaching the toliet.
and Solomon Islands. Some of these areas are 2000 metres above sea level, where it was previously too cold for malaria mosquitoes to survive. There have been recent outbreaks of mosquito-borne diseases, such as dengue fever, in French Polynesia, Fiji and Samoa (Moore, 2002).

In 1998 drought wiped out two-thirds of the sugar cane crop in Fiji. Sugar cane is a major source of income for Fiji Islanders. In the same year, drought halved the squash harvest in Tonga. Water shortages are becoming commonplace in Tuvalu, Kiribati, Federated States of Micronesia, Samoa and Papua New Guinea (Moore, 2002).

Tropical cyclones (or typhoons) are becoming stronger and

Not the eyes of an angry owl! Tropcial cyclone Ului (left) and Tropical cyclone Tomas (right)
more frequent. In 1997 a super typhoon, Paka, hit Guam while three other super typhoons (Joan, Ivan and Keith) roamed the north Pacific Ocean (Moore, 2002). Within a span of five weeks from February to March 2005, four tropical cyclones hit the Cook Islands. The three in February (Meena, Olaf and Nancy) had devastating effects; the fourth (Percy) in early March was the strongest and most destructive of all of them. In December 2006 to January 2010, many tropcial cylones caused havoc in the eastern Pacific Islands of Aitutaki (Cook Islands), Samoa, Fiji and Tonga. The image on the right shows tropcial cyclones Ului and TC Tomas.

In 1998 in Palau, there was bleaching of about 75% of corals in waters shallower than 15 metres. In Fiji, bleaching has struck 65% of the reefs. Similar problems have been reported from Tonga, the Cook Islands and Solomon Islands (Moore, 2002).

Many Pacific Island people are abandoning their islands to live in New Zealand, Australia and the USA.

What is global warming?

Global warming is an average increase in the Earth’s temperature, which in turn causes changes in climate.

Scientists believe that a warmer Earth may lead to changes in rainfall patterns, a rise in sea level caused by slow melting of polar ice, and a wide range of impacts on plants, wildlife and humans.

What about greenhouse effect?

Although some people use greenhouse effect to mean the same thing as global warming, it has a more specific meaning. Greenhouse effect is a natural warming process, in which a layer of ‘greenhouse gases’ in the atmosphere absorbs the heat energy from the sun and keeps the Earth’s atmosphere warm and hospitable for living things (see the diagram on the right). Without this important warming process, life would not be possible on planet Earth.

But why is this natural warming process a threat?

Human activities – especially the burning of fossil fuels (e.g. coal and oil) – intensify the greenhouse effect. These are the three most important greenhouse gases:

It is not only gases that contribute to the greenhouse effect. Other contributors include clouds, soot and dust particles.

Global warming is a term that many Pacific Island school children (and teachers) have heard of. They may know related terms too, such as greenhouse gases, greenhouse effect and sea level rise, especially from science lessons. However, it is likely that most do not fully understand this natural phenomenon. On leaving school, they remember global warming as just one of those science topics they learnt at school. They have the knowledge to confidently describe how it is caused and how it could be avoided. But there remains some key questions in relation to their learning:

Education is believed to be where a lasting solution to the challenges of global warming and climate change can be found. Pacific Island education has done significant amount of work on climate change mitigation and adaptation. However, the urgency of climate change and the imminent threat it poses to our very existence as an unique group of people, calls not only for new ‘solutions’, but for new questions. We need to understand how well core ideas and skills have actually been understood and practiced by every learner. Further, we also need to understand how the formal curriculum, at all levels of education in the Pacific, has changed in response to climate change.

The compartmentalization in the existing curriculum on the ground of subject disciplines unavoidably leads to an exam-oriented education system that treats climate change as a ‘science-only’ issue or in some cases an ‘extra-curricular’ component of students’ learning experiences. Regardless of the level of education at which we operate, our hope for successful Climate change initiatives, hinges on the existence of an inclusive interdisciplinary curriculum framework that is grounded on the values and principles of ESD. It is only through Pacific Island people learning to know, learning to do, learning to be, and learning to live together sustainably that real and fruitful efforts to counter Climate change can ever take place.

The traditional science-oriented focus of the teaching of Climate change, especially in the Pacific secondary school, is discriminatory. In most of the existing curriculum in the Pacific Islands, Climate change is taught mainly to students of Science and Geography. Consequently, the larger proportion of students that do not take these subjects lack the basic understanding and skills relevant to mitigating and adapting to Climate change.

Our perceptions of Climate change Education

The issue discussed above is probably due to a resilient belief that Climate change is only an environmental issue and therefore it should be taught only in the Sciences and Geography. Further, because of this belief, the teaching of Climate change focuses mainly on the scientific facts about climate change – the chemistry, the trends, mitigation strategies, etc. However, there has not been adequate curriculum effort to emphasise the socio-economic nature of Climate change; there is no provision in existing curriculums to address moral issues, human behaviour, and attitude (the core of all problems).

There are excellent existing curriculum initiatives related to Climate change (e.g. Live and Learn environmental programmes, Sandwatch, and ASPnet, SPREP’s educational programmes). But when these efforts, however, reach the formal school setting, most of them are treated as ‘extra-curricula’ activities, and therefore not examinable.

As the greatest challenge of our time, Climate change warrants everyone’s careful attention. The urgency and importance of Climate change must be reflected in all that we do in education. Instead of being treated as ‘unimportant’, Climate change education should take centre stage in our classroom practices, both instruction and assessment. 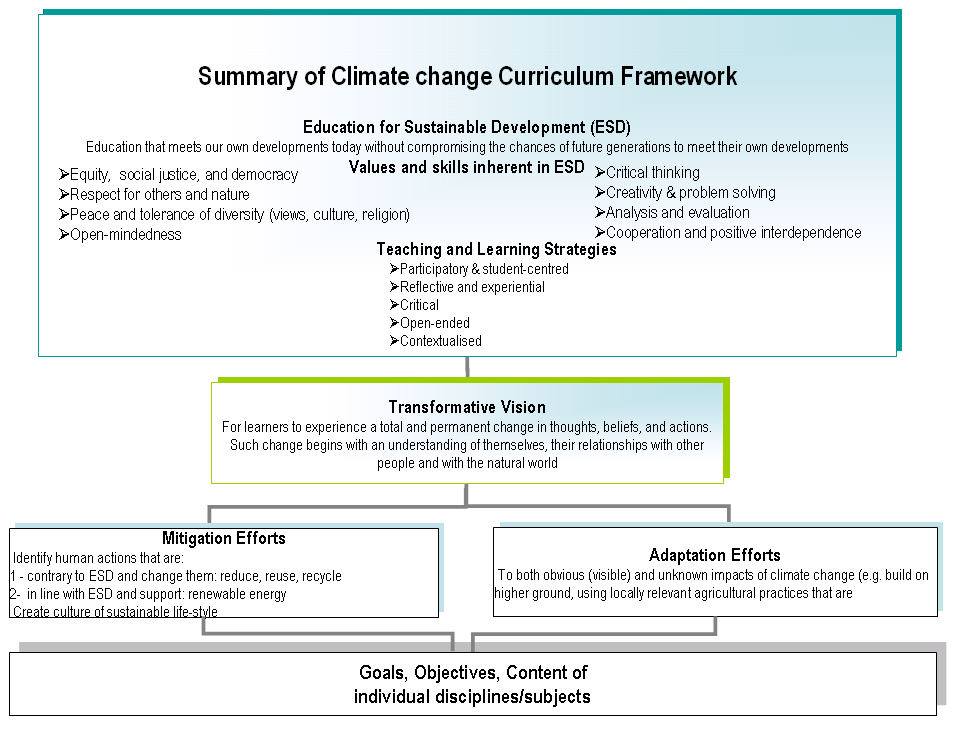 Framework of a Climate change education curriculum for the Pacific Islands
If the necessary changes in our societies are to be effected in time, our education systems must do everything within its powers not only to speed up our response to climate change but also to ensure that actions taken are sustainable and effective in the long-term.

A re-orientation of the curriculum (using what we currently have) would ensure wise use of knowledge. An effective climate change education curriculum, must:

Since climate change is the consequence of human actions, the focus of our education systems must be not only on identifying unsustainable actions but also on transforming them. At the core of this is transforming people’s approaches to life, belief systems, and perspectives. Necessary skills and concepts that would facilitate such transformation need to be included in all subject curriculums. These skills and knowledge include:

Re-orienting the curriculum to respond to climate change needs to ensure that learning experiences are available to every learner in all levels of education. Relevant skills and knowledge for mitigation, adaptation, and transformation must be taught in all subjects areas, at all levels, and must be learnt by everyone. It must be a climate change education for all.

Be interdisciplinary in nature

This would provide our people with opportunities to deal with problems (such as climate change) that require many overlapping solutions and to apply their learning in real-life situations.

Current efforts appear to be ad hoc in nature and many appear to cease when funds are no longer available. Different arms of one government would be working one iniative but are totally unaware of similar initiatives that are happening in other arms.  Therefore these is a need for careful coordination of these efforts to ensure coherence and long-term impact. For school/university subjects/courses, adequate overlapping (of objectives and content) is needed to promote interdisciplinary thinking and facilitate meaningful application of learnt skills and knowledge.

Assess what we truly value in education (both process and product)