There are several types of storage devices. Some of them are explained below:

The hard disk is one which is normally fixed in the CPU. However, external hard-disks which are portable are also available. They consist of one or more rigid platters (on which data is read/written using read/write heads) coated with magnetic material. Hard-disks can store greater amount of data than floppy disks, and we can store and retrieve data faster as well. Hard-disks are available in Gigabytes and even Terabytes. 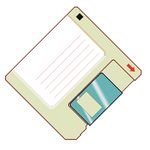 A floppy disk contains a flexible rounded piece of thin plastic coated with magnetic material inside the plastic casing. Data is written in concentric circular bands. The storage capacity of a floppy disk is 1.44MB.

USB Flash Drives, for example pen drive, is a small portable storage device which can be plugged in a USB port. Large amount of data and files can be stored. Its capacity is available in various Megabytes and Gigabytes.

A CD-ROM is an optical disk on which we can write only once and the contents cannot be modified. It is used to store programs and music. The capacity of a CD-ROM is about 650MB.

A DVD is an optical disk with greater capacity than CD-ROM. A DVD can hold gigabytes of data and files. It is also often used to hold software and movies.

Computers are one of the major tools used for communication. Distance is no longer an issue and communication may occur in real time as well.

E-mail is generally used to refer to Electronic Mail. Instead of sending the traditional paper letters, e-mails can be used to send text messages, images, and even files. The email take only few seconds to reach the one it is destined to and can be sent 24 hours a day. So there is time flexibility.

Instant Messaging allows messages to be sent and received almost instantly across the globe. The youngsters of nowadays make use of this technology very frequently to keep in touch with their peers. It is even possible to use this technology for professional purposes like discussing with colleagues, amongst others.

Through social networks, people can interact with each other across the globe virtually, thus not restricting themselves to only one country. The local boundary has been crossed. As a result, the numbers of contacts and the number of friends has witnessed a great expansion. A larger pool of resources is now available since findings, information and experiences can be posted, discussion platforms can even be created where views and ideas can be shared and debated. Also, it is another strategy adopted for advertising and marketing activities. Our general knowledge is enhanced since up-to-date information is readily available. There is also a sort of flexibility since we can access the sites anytime and at our own pace.

It is true that computers are very essential tools and help us in various ways. However the information stored and transactions made in/through computers also suffer from various security risks.

A virus is a program that attaches a copy of itself in the executable files. When the latter runs, the virus also executes and causes ‘infection’. It can cause damages like corruption or deletion of files.

The worm copies itself across the network without attaching itself to any files as such.

Spam refers to the transmission of unwanted, unsolicited mails to various e-mail addresses at a time. This usually comprises of commercial ads. Spam uses a lot of network bandwidth.

Spyware refers to software that spy on users and collects personal information without the consent of the users.

Malware is a program used to penetrate or damage the computer system without the owner being aware of it. The malware can redirect the searches made by the user, provide pop-up ads, and it may even track what are the web sites which the user has visited.

Hacking refers to the unauthorised access to the data found on the computer system. It is usually used to steal information.

To prevent viruses from spreading, it is important that an Anti-Virus Software is installed on the computer system and it should be updated regularly. Furthermore websites and emails that are doubtful should not be opened. Also, after having used a pen drive or floppy disk in a computer, it is important to scan them before opening them on another computer. It is also necessary to check that the firewall in the computer is turned on in order to prevent threats. Various Anti-Spyware and Anti-Malware softwares are also available to enhance the security of the computer system.

Areas where computers are used

Many industries nowadays have introduced computers in their environment. Some industries use computers to control robots whilst others for simulation purposes.
For example:

The entertainment field as well did not turn a blind eye to computers. On the contrary, thorough usage of computers can be observed. For instance, the special effects we see in movies, the mixing of sounds, the creation of cartoons and 3D characters, all these are made using computers. Furthermore, computers are also used to create games.

In the medical field, computers help in diagnosing some illnesses and also help in monitoring patients. The information can be represented using charts and allow doctors to go through the graph for analysis.
A hospital management system can also be put in place with the introduction of computers. In other words, the system becomes automated. Records of patients can be stored in a database and retrieved later on. This eases searching of information about patients and also reports can be generated.

Computers have also brought many changes in the field of education. For instance, students are no longer confined to only the school premises or books to gain knowledge. With the availability of several educational software and of course the internet, a greater pool of enriching resources is at the disposal of students. The learning process has become more flexible. Furthermore, distance learning and e-learning are also becoming dominant. Students can learn anytime and anywhere once they have access to the internet and also participate in interactive virtual classes carried out by the tutor. As it can be seen, computers and the technologies have enhanced learning in a great manner.

Back to Previous Part...