User:Teromakotero/Autism/History of autism before diagnosis

History of autism before diagnosis 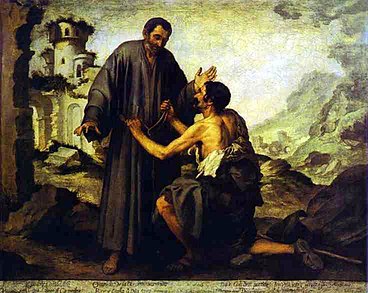 
The story is called: "How Brother Juniper cut off the foot of a pig to give it to a sick brother”. In the story Brother Juniper visit a sick brother in the monastery called St.Mary of the Angels. Brother Juniper brother asked sick brother, if he could do something for him. The sick man replied that it would be a great comfort for him if he could eat the foot of a pig. Juniper answered that he could leave the matter to him. He could get one straight away. So Juniper left and took a knife from the kitchen. He went into the woods where the pigs were on pasture. As soon as he had got hold of one, he cut of a foot and ran back, leaving the pork leg cut suffering. Returning to the monastery Brother Juniper washed pig’s foot thoroughly, and diligently prepared and cooked it. Then he took the pig’s foot to ill man, who ate it eagerly. At the same time as the sick brother was eating, Brother Juniper told him how he acquired the pig’s foot.


When pig’s owner found out about the case, he became angry and went angrily to the Monastery. The monks tried to reassure him, but he did not calm down. Then they called Brother Juniper. He did not understand that he had done anything wrong, but a merciful act. Eventually the pig’s owner realized Brother Juniper's sincerity; fell at his feet and asked tearfully apologize for his actions. Then he went and killed the pig and gave it to monks.

Russian Orthodox Church honored abnormally behaving persons. They were called Fools for Christ's sake (jurodivyi, юродивый). Of them also used the names Holy Fools or God’s Fools. They threw themselves fools for their own and for their fellow human beings salvation's sake. Holy Fools had epilepsy, they threw objects, they had attacks and odd speech. It was thought that they had mental abilities such as clairvoyance. They differed from others by clothing and speeches. They broke the norms and behavior rules. Fools occurred mostly during the period 1400-1650. 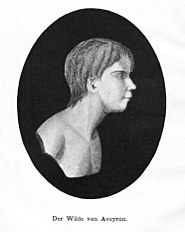 Victor was discovered in 1797 near Toulouse, France, wandering in the woods of Aveyron, according to which he has been called also the wild boy of Aveyron. When he was found he was ten or eleven years old and apparently had lived his entire childhood alone in the woods. A young medical student, Jean-Marie Itard, began working with him intensively. Although Victor learned to talk a bit, he could talk only a couple of words. 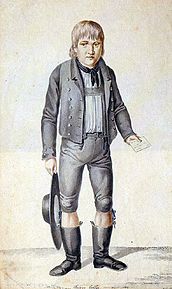 Shoemaker found Kaspar Hauser wandering the streets in 1828 in Nuremberg, Germany. When found he was about sixteen years old. He walked trudging. He didn’t understand the words and the links between things. One was from a keeper, to whom Kaspar's mother had entrusted her son. In the letter the keeper states that he could no longer take care of the boy, because he already had ten children. In the older letter Kaspar’s mother says that she is unmarried and that boys name was Kaspar, that he was born on April 30, 1812, and that his father was a cavalryman of the 6th cavalry regiment at Nuremberg. Kaspar Hauser was placed in the care of university professor George Friedrich Daumer.

When Kaspar was discovered, he did not eat anything other than coarse bread, and drank water. He was light-sensitive, he walked strangely, his communication skills were deficient, and he spoke only few words. He liked to organize the objects, had good memory for certain things, and he preferred to be left alone. Kaspar Hauser, however, learned to speak quickly. He also learned to write and draw. Thus he was able to describe the circumstances in which he had lived and what he had experienced.

Kaspar Hauser  told that he had been kept in a dark, soundproof room or in a box, in which he did not fit to stand or lie straight, having only bread and water for food.

The Reverend Joseph Amrito Lal Singh, rector of the local orphanage, says in his diary how he found the two girls in a termite mound, in which the wolves had made their nest. The girls were found 1929 in Midnapore forest, India. When found, they were 1 1 / 2 and 8 years old. They moved with four limbs and ate preferably raw meat and milk. Girls were named Amala and Kamala. Amala died one year after the discovery. Kamala lived nine years to the age of 17. Amala learned a few words. Kamala developed slower, but after five years she knew about 50 words and short phrases.

Singh claims in his diary that these two girls showed in the orphanage wolf-like behavior typical for feral children. They did not allow themselves to be dressed, they were scratching and biting people who tried to feed them, they rejected cooked food, and walked on four limbs. Singh claimed that both girls had developed thick calluses on their palms and knees as a result of walking on all four limbs. Singh also claimed that the girls lived mostly at night, that they had an aversion to sunshine, and that they could see in the dark. According to Singh they also had a precise sense of smell and improved hearing ability.

Singh tells that the girls enjoyed the taste of raw meat and ate it preferably in the bowl on the ground. According to Singh Amala and Kamala seemed to be insensible to cold and hot, and they seemed to be without any human emotions, except fear. Singh also claimed that they howled like wolves at night and did not speak.

The reliability of Singh’s reports is very doubtful. He was the only eyewitness to these events, which he describes. French surgeon Serge Aroles has shown in his book “L'énigme des enfants-loup” that Singh's story of Amala and Kamala was a scam.

Girl, who became known as Genie to conceal her real identity, was found in 1970 in Los Angeles suburb of Arcadia in the USA. She had lived ten years isolated from others most of the time tied to a child's potty chair in a room with two windows cloaked. When she was 13 1 / 2 years old, situation was revealed and she was taken into custody by Los Angeles authorities. Among other things, she learned some rudiments of language. Thereafter her development almost stopped.

Genie had learned to speak when she had 20 months of age and the doctor had told her parents that she was possibly mentally retarded. Genie's father locked her in a bedroom. Genie spent her nights in a sleeping bag, with a metal object blocking her mouth. If she vocalized, her father beat her. This is probably the reason why Genie did not know more than a few concise words and statements.

When Genie was 13, she was discovered after her mother had left her husband. Initially she was thought to be autistic. When the truth became clear, Genie was taken to children’s hospital and her parents were accused of ill-treatment. However, her father killed himself soon after the discovery Genie.

When they began to train Genie after she had been taken to custody, she rapidly learned in a few months to speak some words and phrases and to put her clothes on. Later on, Genie learned more language and was also able to conduct small-scale discussions about the times when she had been treated badly. If she was not able to express herself in words, she could try to communicate by drawing pictures.