This paper makes an exploratory study in the area of e-learning and the models that exams the technology acceptance, especially by learners. It describes various models that seek to explain learner’s behavioral and actual intention to use a technology system. The study on technology (e-learning) acceptance models is useful for both academic and practitioners of e-learning, especially under the sustainability issues.

The term ‘acceptance’ is used from authors with different background and approaches. In fact, in the literature, acceptance hasn’t a unique definition. TAM (Davis, 1989) describes acceptance as ‘users decision about how and when the will use technology’. Martinez (Martinez-Torres et al., 2003) notice that initial use (acceptance) is the first critical step toward e-learning, while sustainable success depends on its continued use (continuance).

As mentioned before a plethora of models have been developed to explain the technology acceptance in general and Information and Communication Technology (ICT) in particular. Lets see the road map

1. The Theory of Reasoned Action (TRA) proposed by Fishbein and Ajzen (1975) to explain and predict the people’s behaviour in a specific situation. TRA is a well-known model in the social psychology domain. According to TRA a person’s actual behaviour is driven by the intension to perform the behaviour. Individual’s attitude toward the behaviour and subjective norms are the ‘loading factors’ toward behavioural intention. Attitude is a person’s positive or negative feeling, and tendency towards an idea, behaviour. Subjective norm is defined as an individual's perception of whether people important to the individual think the behaviour should be performed.

2. The Ajzen’s Theory of Planned Behavior (TPB) is another well-known model. TPB is a well known theory (grounded on sociology) that has been used to explain social behavior and information technology use (Ajzen, 1985, 1991; Conner & Armitage, 1998; Dillon & Morris, 1996; Sutton, 1998; Kwon & Onwuegbuzie, 2005). More specifically, according to Ajzen (Ajzen, 1985, 1991), intension is an immediate predictor of behavior. This intension is loaded by Subjective Norm –SN- (i.e. perceived social pressure), PBC (the beliefs about the ability to control the behavior) and one’s attitude towards a behavior. Further more, a behavioral belief (a specific behavior lead to a specific outcome), weighted by the evaluated desirability of this outcome forms an attitude (Kwon & Onwuegbuzie, 2005). Ajzen (Ajzen 1991, p. 188), defines PBC as “the perceived easy or difficulty of performing the behavior”. TPB views the control that people have over their behavior as lying on a continuum from behaviors that are easily performed to those requiring considerable effort, resources, etc.

3. Task technology fit model (TTF).Dishaw and Strong (Dishaw & Strong, 1988) claims that the only reason for IT use is if the available to the end user functions fit the user needs and activities. The basic version of TTF that has been tested (Goodhue & Thompson, 1995) (figure3 appendix). Actually, the TTF match the demands of a task and the capabilities of the chosen technology. The very early version does not include the ‘Actual Tool Use’ as an outcome variable, because they didn’t focus on behavior. As Goodhue (1998; 1995) notice, individual abilities, such as computer literacy and experience become common additions in later versions of TTF. Dishaw et al (2002) provide us with another modification of the TTF including the factor of computer self-efficacy.

4. Innovation diffusion theory (IDT) (Rogers, 1993), is another model also grounded in social psychology. Since 1940’s the social scientists coin the terms diffusion and diffusion theory (Rogers, 1983). This theory provides a framework with which we can make predictions for the time period that is necessary for a technology to be accepted. Constructs are the characteristics of the new technology, the communication networks and the characteristics of the adopters. We can see innovation diffusion as a set of four basic elements: the innovation, the time, the communication process and the social system. Here, the concept of a new idea is passed from one member of a social system to another. Moore and Benbasat (1991) redefined a number of constructs for use to examine individual technology acceptance such as relative advantage, easy of use, image, compatibility and results demonstrability.

5. Expectation-disconfirmation model (EDT) according to Premkumar & Bhattacherjee (2006) is based on expectation-disconfirmation-satisfaction paradigm. Oliver (1980) introduced EDT to explain the critical factors of consumer satisfaction/dissatisfaction, in the marketing area. Here product information and marketing formed a pre-usage initial expectation. After that the customers use the product and form a perception of product performance. The comparison of initial expectation vs. perceived performance drives to the disconfirmation for the product. After that the customer forms his/her satisfaction level.. The EDT is validated in IT by Bhattacherjee (2001) in a study for online banking services. Further more Bhattacherjee and Premkumar (2004) used EDT in order to explain changes in beliefs and attitudes toward IT usage. 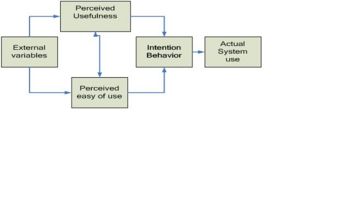 According to Davis (1993, p.1) ‘user acceptance is often the pivotal factor determine the success or failure of an information system’. The term external variables include all the system design features. These features have a direct influence on perceived usefulness (PU) and perceived easy of use (PEOU), while attitude toward using has an indirect influence effect to the actual system use. Davis (1993, p. 477) defines PEOU as “the degree to which an individual believes that using a particular system would be free of physical and mental effort”, and PU as “the degree to which an individual believes that using a particular system would be enhance his/her job performance. As Davis et al (1989) states, the goal is to provide us with an explanation of the determinants of information systems acceptance. Similar to TRA user beliefs determine the attitude toward using the information system. This attitude drives to intention behavior to use which lead to actual system use. Dishaw and Strong (1999, pp. 9-21) pointed out a weak point of TAM about task focus. According to them TAM differs from TRA “in two keys”. The first is that define PEOU and PU as external variables that determine the intension to use not the actual use. The second key is that TAM does not include subjective norms. Yi (Yi et al., 2005), claims that TAM and IDT have similarities, More specific PEOU and PU are conceptual similar to relative advantage and complexity (the opposite of easy of use). As Taylor and Todd (1995) claims, TAM performs slightly better compared with the Theory of Planned Behavior (TPB).Table3 (appendix) summarizes the implementation of TAM in wide range of areas.

7. Venkatesh and Davis (2000), proposed an extension of TAM, the TAM2. TAM2 include social influence process such subjective norm, and cognitive instrumental process such as job relevance, output quality and result demonstrability. The figure6 (appendix) describes the revised TAM

8. Venkatesh et al. (2003), proposed the Unified Theory of Acceptance and Use as a composition of eight prominent models (TRA, TAM, Motivational Model, TPB, Combined TAM-TPB, PC Utilization, IDT and Social Cognitive Theory). The UTAUT model aims to explain user behavioural intentions to use an IS and subsequent usage behaviour. According to this theory 4 critical constructs are direct determinants of usage intention and behaviour (Venkatesh et. al., 2003). The core constructs are: • performance expectancy

However every attempt of building an e-learning system, apart from the theoretical knowledge and the technical documentation, also requires the adoption and the active support of those that it addresses that is the students. E-learning becomes more and more important. In order to reduce cost / benefit ratio, we must examine the gap between system design and system acceptance. So the study of the technology acceptance models becomes more and more important and critical.

Snadek personal blog (both in English and in Greek language)