In case of Giffen goods quantity demanded will vary directly with price. Again an increase in income will generally cause the consumption of most goods to increase. But there are a few goods for which the pattern is reversed. It means an increase in income causes a decrease in consumption. Here for a good to be Giﬀen, the income eﬀect must dominate the substitution eﬀect.

1. The good must be inferior with strong negative income effect.

2. The substitution effect must be small.

3. The proportion of income spent for the inferior good must be very large. 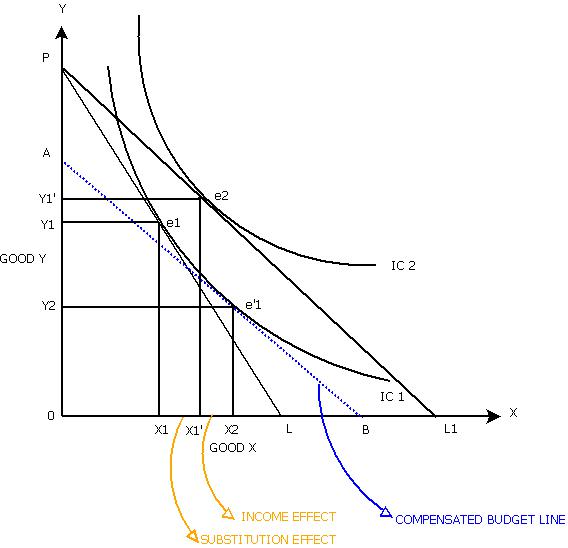 Explanation of the Diagram:

Most students find it very frustrating to illustrate the case of a Giffen good using indifference curves and budget lines because rarely does a diagram come out right the first time. There are two goods, X and Y, and we want to show that X is a Giffen good, i.e., a decrease in its price would cause its consumption to fall. The Substitution Effect occurs when with fall in price, the quantity increases; with adjusting income in such a way that the real purchasing power of the consumer remains the same as before.It is called as 'Compensatory variation in income'.It isolates substitution effect. In the above diagram, AB price line depicts the compensated budget line.AB price line is tangent to the IC1 at point e'1.When Income effect is positive and very strong then there is exception to the law of demand;that is the case of Giffen goods.

For advanced students, the reason why this would work can be given. Recall the Slutsky equation.( Refer: Decomposition of Price Effect: Giffen Goods by Dr Rekha Mahadeshwar Break Up) where the income effect (which is responsible for the perverse effect) is proportional to the budget share of the good. By locating e1 very close to the horizontal axis, we make this share large and, hence, increase the likelihood that the good would come out Giffen.

In case of Giffen goods,both Price Effect and Income Effect are negative.

The negative Income Effect is stronger to outweigh the Positive substitution Effect.

Giffen goods are exception to the Law of Demand. 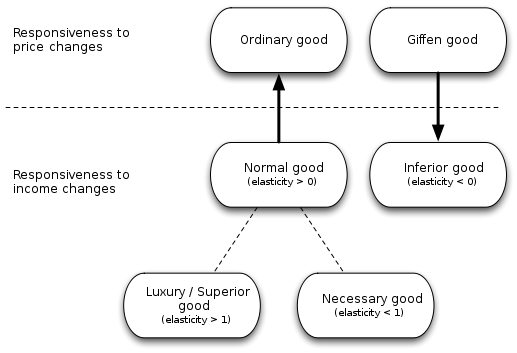