Sculpture and other three-dimensional media

Sculpture is any artwork made by the manipulation of materials resulting in a three-dimensional object. The sculpted figure of the Venus of Berekhat Ram, discovered in the Middle East in 1981, dates to 230,000 years BCE. It is the oldest example of artwork known. The crudely carved stone figure will fit in the palm of your hand. Its name derives from the similarity in form with so-called female fertility figures found throughout Europe, some of which date to 25,000 years ago. 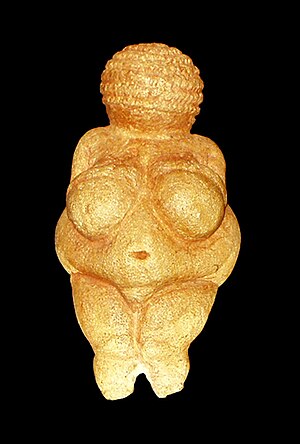 Venus of Willendorf, c. 25,000 BCE. Natural History Museum, Vienna
For example, the form of the Venus of Willendorf shows remarkable skill in its carving, including arms draped over exaggerated breasts, an extended abdomen and elaborate patterning on the head, indicating either a braided hairstyle or type of woven cap. Just as remarkable, the figure has no facial detail to indicate identity. The meaning behind these figures is difficult to put into context because of the lack of any written record about them or other supporting materials. 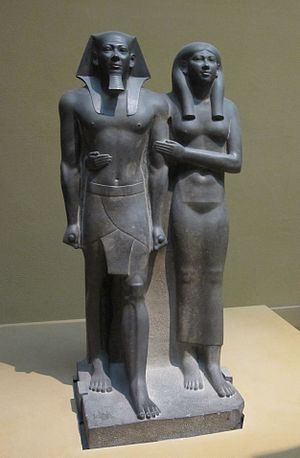 King Menkaura (Mycerinus) and queen, 2490–2472 BCE. Greywacke, Museum of Fine Arts, Boston
These earliest images are indicative of most of the cultural record in sculpture for thousands of years; singular figurative objects made within an iconographic context of myth, ritual or ceremony. It’s not until the Old Kingdom period of Egyptian sculpture, between 3100 and 2180 BCE, that we start to see sculpture that reflects a resemblance of specific figures. 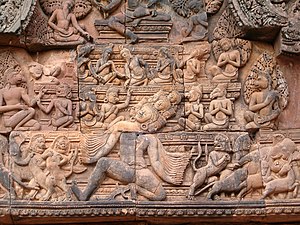 Bas-relief sculpture at the temple Banteay Srei, Angor, Cambodia. 10th century. Sandstone.
Sculpture can be freestanding, or self-supported, where the viewer can walk completely around the work to see it from all sides, or created in relief, where the primary form’s surface is raised above the surrounding material, such as the image on a coin. Bas-relief refers to a shallow extension of the image from its surroundings, high relief is where the most prominent elements of the composition are undercut and rendered at more than half in the round against the background. Rich, animated bas-relief sculpture exists at the Banteay Srei temple near Angor Wat, Cambodia. Here humans and mythic figures combine in depictions from ancient Hindu stories. 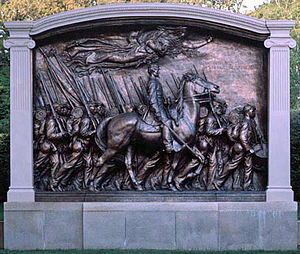