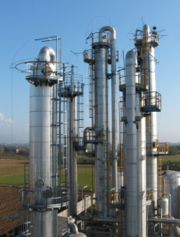 Fermentation (see previous answer) produces from 5 - 15% alcohol (depending on the source). In many cases we wish to have to higher concentrations. We increase the concentration by using distillation. In distillation we heat the liquid until we get two phases - vapor and liquid (like boiling water). Distillation uses the fact that the two phases will have different concentrations. 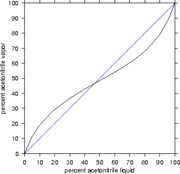 Diagram of composition of a two-phase (vapor-liquid) mixture of acetonitrile and benzene (black line). The blue line is a reference line where vapor and liquid phases concentrations would be equal. Where the two lines cross is the azeotrope.

It turns out that water and alcohol at 95% form an azeotrope. An azeotrope is a mixture where the liquid phase and vapor phase concentrations are the same. These are extremely important because we cannot separate a mixture by ordinary distillation beyond an azeotrope.

Thermodynamics is a very powerful instrument to tell if an azeotrope occurs and at what concentration it occurs.

The study of two (or more) phase systems is called Phase Equilibrium.