VIDEO CLIP TO VIEW: It's a TEAM EFFORT that makes all this scientific research possible. Vonda introduces the team of scientists/divers at New Harbour and explains how everyone is needed for it all to work well.

Vonda and Drew are the scientists that co-ordinate the experiments with the benthic animals and sea water here at New Harbour.

VIDEO CLIPS TO VIEW: HAVE A LOOK AND LEARN ABOUT THE WORK NIWA SCIENTISTS ARE DOING WITH THE BENTHIC LIFE (SEA FLOOR DWELLERS) IN ANTARCTICA -

One of the things Vonda is researching are the scallops. She finds out what they eat and where they fit in the food chain.

Vonda needs the divers to collect scallops from the sea floor and bring them up for her to weigh, measure and dissect for further tests back in NZ with a machine that reads isotopic signatures. 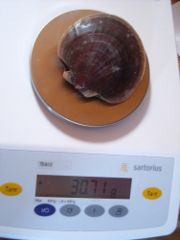 Weighing a scallop for research

When Vonda dissects the scallops she removes the mantle (which has hundreds of eyes all around the edges of the shell, that glow underwater!!). Another scientist back in NZ will do a metabolic analysis (look at the energy used) and a genetic makeup, so Vonda has to snap freeze these samples in liquid Nitrogen.

A muscle sample is taken for testing back in NZ (the RNA and DNA is tested) which will look at the metabolic rate (to understand the energy of the scallop). So this sample needs to be snap frozen in liquid nitrogen. 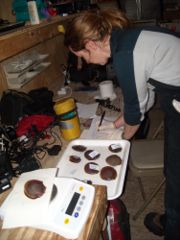 Vonda recording information about the scallops 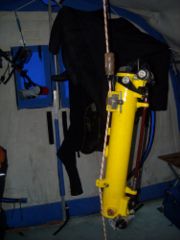 This Niskin bottle is used to collect water samples down deep 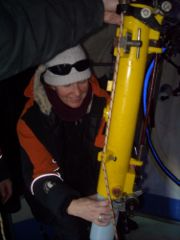 Vonda taking a water sample with the Niskin bottle

Vonda also takes water samples of the sea water 10 metres down, to measure the pH (how acid or alkaline it is) and measure organic carbon content. She uses a Niskin bottle that drops down on a rope with the ends clipped open. When at the required depth, a heavy, small, metal bullet shaped 'messenger' is sent down the rope to close the ends of the bottle, trapping the water inside. It is then pulled up and the water decanted. It's EASY and FUN especially watching the bullet messenger plunge down through the water! Vonda checks each day to see if the pH and carbon content of the water stays the same. There is not much water movement here under such thick ice, so the measurements should stay around the same.

In fact the water is so calm under the ice here that divers can leave things on the bottom and they will be there when they come back. This is helpful for Drew's experiments as we will see next. It was also helpful for Luca who accidentally dropped his camera cap down the safety hole when he was taking a photo... the next morning he dove down and found it lying directly below the safety hole - it hadn't moved an inch!!

Brittlestars used for Drew's experiments. They were scooped gently into the chambers on the sea floor

Drew is doing experiments with sediment and Brittlestars that live on the sea floor here at New Harbour. The divers (including Drew) have put out 16 chambers with lids on the sea floor, in a line at the same depth. These chambers enclose little square patches of sea floor, so there is sediment in each chamber. These are used for housing different numbers of brittlestars. The chambers have 0, 5, 10 or 15 brittlestars per chamber. Each treatment is repeated 4 times to get the total of 16 chambers. (Can you work out how many brittlestars the divers had to find in total?!)

VIDEO CLIPS TO VIEW: Drew explains the work with the Brittlestars on the seafloor and The team of scientists work late into the night to prepare the equipment needed for the Brittlestar Experiment -

The calm, clear water makes it easier to set out all the chambers, lids, dark covers, clips etc. because they don't drift away. It would be much more difficult to do these experiments in NZ sea water! The divers had to collect all these delicate animals very carefully, scooping them along into the chambers. (The divers have to be very careful not to stress the brittlestars because they tend to drop off arms when they are stressed, in order to escape!) 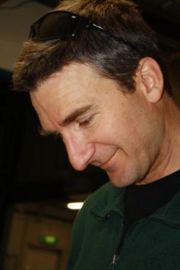 Drew concentrating hard on getting all his scientific equipment ready. This scientist loves his job!)

There was a lot of preparation required to be able to begin this experiment. Each chamber needs a base and a lid to contain the brittlestars. Each chamber also has a data logger inside it to record oxygen and temperature readings. These data loggers need to be loaded with batteries and needs the seals checked to be sure they won't leak underwater, then tested to make sure they are operating correctly. We had to be extra careful with these... because each one of the larger data loggers costs about $4000 and the smaller ones cost $1500. Not only are they expensive but if we would have damaged one, it would have been too difficult and taken too long to get a replacement all the way out here!!

Vonda filling syringes with food for the chambers 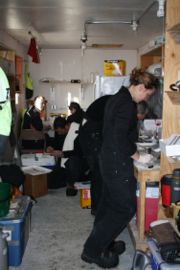 At times the little lab at New Harbour gets very busy!

The brittlestars were given food in controlled amounts as one single pulse of organic matter. At this place in New Harbour, food is thought to arrive at the seabed in a distinct summertime pulse, (this means that the animals may get ALL of their food for the year in one hit during the summer), so Drew wanted to simulate this process. Divers squirted food into the chambers with large syringes. Drew wants to see how the system inside each chamber responds to the introduction of organic food. The bacteria in the chamber sediment recycles the organic matter and turns it into nutrients. This process uses oxygen. The brittlestars also breathe in oxygen and they excrete out nutrients. So Drew can measure changes in oxygen and nutrients in the chambers. Do you think oxygen will increase or decrease inside the chambers? HINT: there is not much algae down there and it is very dark!!.

Chambers on the seabed with dark covers over them

One incubation was done in the light and one in the dark (using dark covers on top of the chambers) so they could measure rates of primary production. The dark chamber has no 'production' because photosynthesis can't happen in the dark, so any change is due to 'respiration'.

The divers took water samples from the chambers each morning and each afternoon and Drew measured the dissolved oxygen concentration of these. The samples were filtered and these will be sent back to NZ for nutrient analysis. 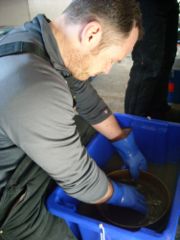 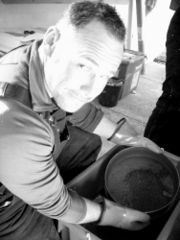 Sediment samples were colllected with cylinders that the divers pushed into the seafloor. These were rinsed and sifted in seives that let through anything smaller than 0.5mm and kept behind everything larger than 0.5mm. The sediment samples are to be sent back to NZ for analysis. They will be finding out: 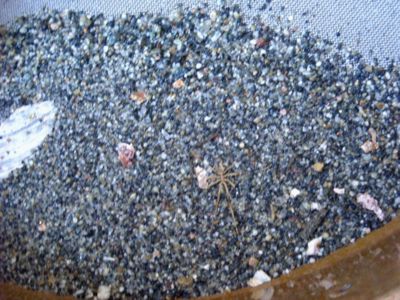 Can you spot the organic fauna (sea animal) in the sediment?

All this information is useful for understanding the marine benthic (sediment) food web. Together with the Brittlestar nutrient cycle (as shown in the slide show above) it all helps explain how the system under the sea ice fits together.

The sea waters here in New Harbour are really high in nutrients but have very low light (it is very dark under 4metre thick sea ice!), so even though there is not much algal growth now, when the sea ice does finally break out, the scientists know that there will be a hugh algal bloom (lots of nutrients for the algae to use for production!).

VIDEO CLIP TO VIEW: HAVE A LOOK AT THE FISHING THE SCIENTISTS DID THROUGH THE DIVE HOLE AS PART OF THEIR SCIENTIFIC RESEARCH IN ANTARCTICA - Fishing at the dive hole at New Harbour, Antarctica, 2009

Drew fishing in the dive hole.

A fish in the dive hole.

The team has a permit to fish for ten fish here at New Harbour for research purposes. No Antarctic sea or land animals are allowed to be taken for human use or consumption. They are protected and only a few allowed for the purposes of science. We had to make sure that the fish were not stressed (otherwise the research samples don't work so well) and the killing had to be done ethically. So the fish were put in a chillibin with sea water taken from the dive hole (which would be just the same temperature and conditions as the fish came from). They were then taken to the small lab here at New Harbour and anaethetised so they basically went to sleep. Then the spinal chord was severed so they did not feel a thing, and they were dissected carefully. The samples were then snap frozen in liquid nitrogen and they will be flown back to NZ for another scientist to work with.

An anaethetised fish ready for dissecting.

Ten fish in the chillibin with cold seawater

The scientist who will be working with the fish samples back in NZ couldn't come to Antarctica this year, so this team caught the fish for her. They want to be sure that they make the most out of one trip to Antarctica. This shows the collaborative approach that these scientists have to research.

Scientists are keen to share their knowledge and learn from each other to gain a bigger picture and understanding of the whole systems that are functioning in our world.