This activity is designed to allow students to observe termite trail-following behavior. Termites will tend to follow lines made on paper by ballpoint pens because the ink contains a chemical that is similar to the trail pheromones used by termites to lead colony members to food sources. There are several pen brands that termites will follow and a great many other products (including markers, pencils etc) that they will ignore.

This activity is essentially exploratory, so handouts should not be necessary. For higher grades it may be useful to develop a data table for replicated experiments. This can easily be extended and done as a table exercise to connect with the math curriculum. We have used this simple handout of the scientific method with some success: 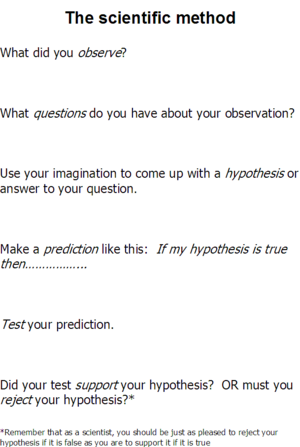 Supply each group with a blank sheet of paper and a ball-point pen. Ask the students to draw a circle or other shape approximately eight inches across.

Tap a single termite out of the vial into the circle and ask the students to make notes on its movements.

If all goes well, the termites will wander until they hit the line, and then follow the line as if their life depends on it.

After allowing for as much observation as your group is up for you can ask the students to figure out why the termites follow the lines. This can be approached initially by asking how termites might detect a line. What senses could they use? The students can then be encouraged to try different experiments to eliminate each sense.

Scientific method; One approach that works well is to take students through the following sequence:

Experiments that have worked well in the past

It would be wonderful if other teachers would add their ideas and experiences here.

One major drawback and risk of this experiment is that the termites may be cooked or frozen during delivery depending on the climate where you live. So you need a backup plan in place. Also, termites should be returned to a separate moist dark vial after about twenty minutes of observation. They tend to dehydrate fairly quickly. Refrigerate your termites if you plan on keeping them around for a few days. Allow them to warm up to room temperature before experimentation. Sluggish termites are probably not healthy and should be replaced. If your refrigerator is set too cold the termites might be sluggish or dead.

The data from the experiments can provide an opportunity for making tables. Categories could include materials that termites did or did not follow. One could perhaps draw a pair of converging lines and measure the minimum distance between lines before the termite tended to be distracted by a second line. Students could graph the age of lines and see at what line age following was lost.

S1-8 Scientific enquiry; S7 (representing data) would be addressed only if the data are tabulated or graphed in some way.

There are several ways one could go with the results of this experiment and also with the organisms. Here are some possibilities:

-Insect anatomy. Termites are large enough that students could sketch them with just a hand lens. You can plainly pick out the three major body segments (head, thorax, abdomen); it is easy to see the six legs are attached to the thorax; there will not be any wings and that can be discussed in terms of living underground. The jaws and structures on the head are on the small side and would probably require a microscope unless you happen to have some large individuals. The termites could be compared to other insects and to spiders in books from the school library.

-Insect food, habitats, and role in the environment. Termites are wood eaters and can be thought of as natural recyclers of dead wood. They play an important role in the environment; not so much in your house. Termites lack the enzymes to break down wood, but there are unicellular organisms in their gut that produce these enzymes; so symbiosis could be touched on. Termites do not occur in the far north east (Vermont for example) but do occur in places like Pennsylvania; this can be touched on in terms of habitat requirements and global warming.

-Insect pests. What can be done about termites in the home? This might be an opportunity to bring in an outside speaker to consider the impacts of termites, and least toxic means of control. Local university extension offices may well have a speaker willing to come to the school.

-Dead individuals can be preserved in alcohol (your school nurse might be willing to part with some rubbing alcohol). They will also keep reasonably well in vinegar. Students could discuss preservation in terms of preventing bacterial growth and the connection to rubbing alcohol and first aid treatment could be made.

So you can't get termites, or you don't like bugs

Some background information on termites in Wikipedia [2]

It seems there is a film version of Roberto the insect architect: [3]