In the previous unit, you studied the concept of positive feedback and the effect of positive feedback on the gain of transistor amplifier. The present unit is a discrete unit but depends on the concept of positive feedback from the previous unit you have studied in this course. In electronics, can you imagine a circuit that produces desired output waveforms without any external input signal? Does it sound possible? Yes, in practice, oscillators are circuits that produce periodic waveforms. In oscillators, the only input requirement is of DC power supply which is required for operation of the active device. The frequency of the generated waveforms may vary from a few Hz to several KHz. It may be used to generate AC waveforms such as sinusoidal, rectangular or sawtooth depending upon the type of oscillators used. They have wide range of applications such as in radios, Televisions, communication systems, computers, industrial controlled applications, and laboratories, as a function or signal generator. We can say that without oscillators very few electronic circuits would be possible. Therefore, in this unit, we are going to learn about oscillators in detail.

An oscillator consists of an amplifier and a feedback network. Now, let us see which basic components are required to obtain oscillations.

To start the oscillation with the constant amplitude, positive feedback is not the only sufficient condition. Oscillator circuit must satisfy the following two conditions known as Barkhausen conditions:


1. The first condition is that the magnitude of the loop gain (Aβ) must be unity. This means the product of gain of amplifier 'A' and the gain of feedback network 'β' has to be unity.

We have stated that oscillators do not require any external input. This means an oscillator's output feeds its own input and it must satisfy the two essential conditions to start oscillations. Here, you might be eager to know, from where the starting voltage comes. All of you are aware that every resistor has certain free electrons. At room temperature these free electrons move randomly and generate a noise voltage across the resistor due to collisions. This voltage is also known as thermal noise voltage. Hence, the resistor acts as small ‘ac’ voltage source. When power supply is turned on, for the first time this small ac noise voltage gets amplified and appears at the output terminal. This amplified output is applied to feedback circuit and output of feedback circuit is fed back to the amplifier as an input. It is again amplified by amplifier and fed back to input through feedback circuit. This process is repeated and at one particular frequency, circuit satisfies the necessary conditions to start oscillation. Using proper feedback components, it is possible to select the particular frequency.

<flash>file=how_oscillations_start.swf|width=70%|height=300|quality=best|</flash>
Fig: How Oscillations are initiated

The name sinusoidal oscillator itself indicates the meaning that this oscillator produces sine wave output.


For any type of circuit to behave as an oscillator, first it must satisfy the necessary and sufficient condition which is mentioned in the previous section. Depending upon the variation in the output waveform amplitude, there are two types of oscillations.

In practice, to obtain the sustained oscillations at desired frequency of oscillations, oscillator circuit must satisfy some of the basic requirements such as,

This equation indicates that if ‘Aβ’ is equal to 1 only then overall gain becomes infinity. This means, there is output without any external input. In reality, to get sustained oscillations, at the first time when the circuit is turned on, the loop gain must be slightly greater than one. This will ensure that oscillations build up in the circuit. However, once a suitable level of output voltage is reached, the loop gain must decrease automatically to unity. Only then the circuit maintains the sustained oscillation. Otherwise, the circuit operates as over damped. This can be achieved in the circuit either by decreasing amplifier gain A or decreasing the feedback gain β.

2. LC oscillators: Here, inductors and capacitors are used either in series or parallel to determine the frequency. They are more suitable for radio frequency(1 to 500 MHz) and further classified as,

3. Crystal oscillator: Like LC oscillators it is suitable for radio frequency applications. But it has very high degree of stability and accuracy as compared to other oscillators.


Principle of RC oscillators:
All of you know that a transistor in CE configuration acts as an amplifier or you can use Op Amp as an inverting amplifier. It not only amplifies the input signal but also shifts its phase by 180º. However, to produce oscillations, we must have positive feedback of sufficient amount. Positive feedback occurs only when the fed back voltage is in phase with the original input signal. This condition can be achieved in two ways.


One way of getting phase shift of 360º is to use two stages of amplifiers, each giving phase shift of 180º, or use noninverting amplifier using Op Amp. In this case, feedback signal does not produce any further phase shift. This is the basic principle of a Wien bridge oscillator.


The given circuit shows the RC combination used in Wien bridge oscillator. This circuit is also known as lead-lag circuit. Here, resistor [math]R_1[/math] and capacitor [math]C_1[/math] are connected in the series while resistor [math]R_2[/math] and capacitor [math]C_2[/math] are connected in parallel. We have to see how this circuit selects only one particular frequency.


Here, one may ask, 'How to calculate this particular frequency?’ It is very simple. The maximum output would be produced if R = Xc.


b) The given circuit shows Wien bridge oscillator using lead-lag circuit. Let us see why the name Wien bridge is given. The basic version of Wien bridge has four arms. The two arms are purely resistive and other two arms are frequency sensitive arms. These two arms are nothing but the lead-lag circuit about which we have already discussed. The series combination of [math]R_1[/math] and [math]C_1[/math] is connected between terminal a and d. The parallel combination of [math]R_2[/math] and [math]C_2[/math] is connected between terminal d and c .


To design oscillator circuit using this bridge, the output of bridge is given to the amplifier stage. Here, noninverting amplifier stage is used to achieve oscillations. 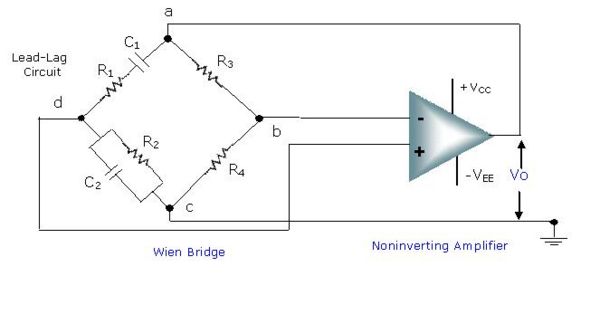 
Can you guess why noninverting amplifier is required? For that, just recall the necessary condition of oscillations. To start the oscillations, the total phase shift of the circuit must be 360° and the magnitude of the loop gain must be greater than one.

For better understanding of the Wien bridge oscillator, the same circuit can be redrawn as shown below. Observe the circuit diagram carefully. The lead lag circuit is used as feedback network about which we have already discussed. Here, noninverting amplifier stage is used to achieve oscillations.


Perhaps you would like to know why negative feedback is required here. To ensure sustained oscillations, the loop gain must be slightly greater than one when circuit is turned on for the first time. For Wien bridge oscillator, the gain of the amplifier must be greater than three (A>3), which will ensure that sustained oscillations build up in the circuit. Hence, to set this gain negative feedback is essential.


In practice, to obtain the sustained oscillations at the desired frequency of oscillations, the product of the voltage gain A and the feedback gain β must be one or greater than one. In this case, the amplifier gain A must be 3.


Hence, to satisfy the product condition, feedback gain β must be 1/3. Here, the gain of the noninverting amplifier is decided by resistor '[math]R_3[/math]' and '[math]R_4[/math]'. 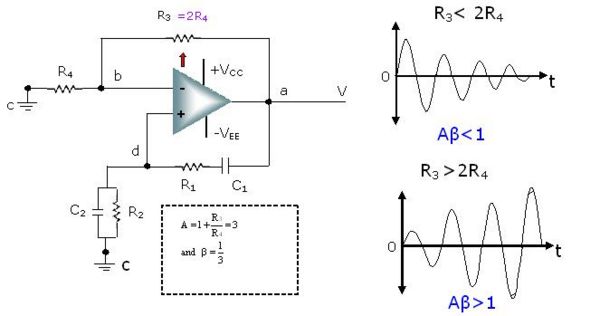 
How to select the component values to set the desired sustained oscillation frequency?


For noninverting amplifier, gain is given by,

Here, the gain of the noninverting amplifier is decided by resistor [math]R_3[/math] and [math]R_4[/math]


We get the maximum output Vo only if resistive value is equal to reactance value. Hence, the frequency of oscillation is decided by resistor R and capacitor C. Actually, the oscillation frequency is given by equation no 2.

Difference between the phase angle of the two waveforms