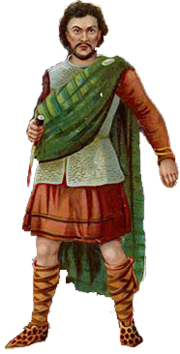 As with all of Shakespeare's great characters, Macbeth's image in our minds is built up by others before he first walks on stage. Read the Sergeant's descriptions of Macbeth's actions on the battlefield.

Other aspects of his character

One could argue that at the beginning of the play, Lady Macbeth drives the couple's ambition, but by the end of the play Macbeth is in charge. What evidence can you find for this statement?

Macbeth's size and power is developed, in part, through the way other characters are contrasted with him. The men most close to him are relatively dull, boring and without a clear sense of individuality.