Audiobook of the complete play 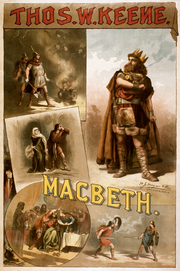 Do you know your 'dost' from your 'wherefore'? There is a glossary of words commonly used in Shakespearean plays [here]. Make sure you know these words, as they'll help you to understand the play a lot better.

Macbeth was written during the reign of King James I, probably around 1606. James was a Scottish king who had ascended the throne of England following the death of Elizabeth in 1603. He was also Shakespeare's patron, as by this time Shakespeare was the main playwright for The King's Men. The choice of content for the play is deliberate: set in Scotland in respect to James' heritage, focused on witchcraft because the king was interested in it and featuring Banquo, from whom James' was said to be descended. Despite this apparent homage to James, Macbeth's exploration of good and corrupt kingship (embodied by Duncan and Macbeth respectively) was quite a gamble; depicting a Scottish king as a tyrant might have landed Shakespeare in mortal danger if he didn't carry it off well. At the time of the play's first performance, people would still remember strongly the 1605 gunpowder plot to blow up parliament and King James. Macbeth's crime of regicide (murder of a King or Queen) had a direct predecessor in Guy Fawkes. Shakespeare was again flirting with death as Catholics were behind the gunpowder plot, and Shakespeare himself was rumoured to be a Catholic.

The complete play is available [here]. Choose a scene and summarise (in your own words) what happens in that scene.

Try to summaries the play in 20 words exactly. Write your summary here: 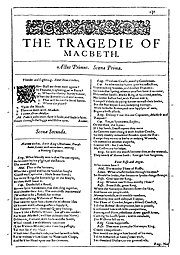 Frontispiece from the first folio