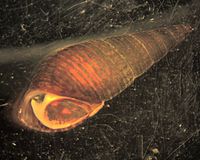 This family of Gastropoda is in the sub-class Prosobranchia, which is characterized by the presence of an operculum, which is a small lid that covers the entrance of the shell. The family Thiaridae is parthenogenetic, and has an operculum. The operculum look like this. 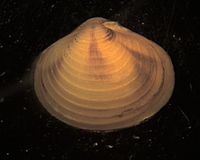 On this shell, the hinge ligament is visible from the outside as a leathery bulge. On the inside, three cardinal teeth are visible, and on either side of those, there are two rows of lateral teeth. Corbiculids, also called Asian clams, are invasive and not currently found in Vermont waters, although they have been found just two locks below Lake Champlain. We have seen them in samples from Puerto Rico and The Bronx NY. .

Images of the hinge ligament, and the teeth.