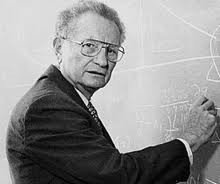 Paul Samuelson has a long list of accomplishments -- A John Bates Clark Medal, a Nobel Prize.Most importantly he is responsible for popularizing Keynesian economics in Post-Second World War.Revealed preference theory was introduced by Nobel Laureate Paul Samuelson in 1938 in the article entitled 'consumption Theory in terms of Revealed Preference'.

As per the theory it is possible to discern consumer behaviour On the basis of variable prices and income. In other words, it has made possible to establish the law of demand without the use of indifference curves on the basis of revealed preference axioms.

According to Samuelson, a consumer with a given income will buy a mixture of products; as his income changes, the mixture of goods and services will also change. It is assumed that the consumer will never select a combination which is more expensive than that which was previously chosen. An economic theory of consumption behavior which asserts that the best way to measure consumer preferences is to observe their purchasing behavior. Revealed preference theory works on the assumption that consumers have considered a set of alternatives before making a purchasing decision. Thus, given that a consumer chooses one option out of the set, this option must be the preferred option.

The assumption implies that preferences are transitive.


1.If one bundle is chosen when another could have been chosen, we say that the first bundle is revealed preferred to second.

2.if the consumer is always choosing the most prefered bundles he or she can afford, this means that the chosen bundles must be preferred to the bundles that were affordable but weren't chosen.

4. The Weak & Strong Axioms of Revealed Preference are necessary conditions that consumer choices have to obey if they are to be considered with the economic model of optimising choice.