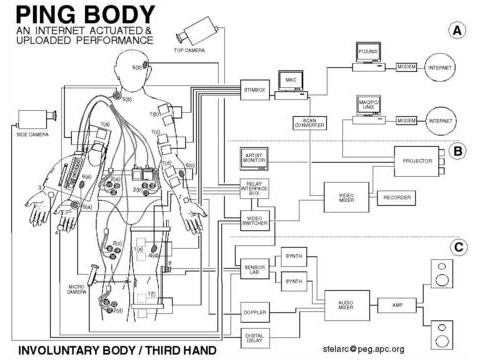 Stelios Arkadiou otherwise known as Stelarc is a Cypriot-Australian performance artist, his practice is multi disciplinary, highly technical, thought provoking and often disturbing, challenging our perceptions of the human body and it's capabilities. In 1996 he first performed a piece entitled Ping Body it was an interactive fusion of electronics and his own body. This work was a continuation of the artist’s experimentation in extending and modifying the human form with the use of technology, electronics and medical procedures. In this particular work he explored the relationship between a physical body and the ‘body’ of the internet, by collecting data from the internet and transforming it into a stimulus for his own limbs. He achieved this by tapping into a procedure known as ‘Pinging’ this is a term that was first used to describe the way submarine vessels located each other in the depths of the ocean, as 'techno-speak' it is now used to describe the process by which one computer sends out a signal to determine the presence of another and also measures the quality of the signal and echo times. The artist attached a number of electrodes to his body, which were in turn connected to an interface, an on-line computer, control computers and other systems including video and sound. Members of his internet audience were invited to ‘ping’ him. Each signal was converted into an electrical impulse ranging between 0-60 volts that stimulated the muscles of his body to move in an involuntary manner, contorting his arms and legs into a jarring yet mesmerising dance. He was also fitted with a selection of medical sensors that converted his biological output data into a variety of sounds that are clearly audible during the performance, a robotic arm camera recorded and projected the artists movements culminating in a complex and strangely beautiful work. Stelarc has consistently poked at our consciousness forcing us to face the finite nature of our own bodies, causing us to question our future with his cybernetic experiments. The prevailing ideology that is evident in all his works is that “This obsolete, absent and empty body needs to be augmented” indeed as technology engulfs us we need artists such as Stelarc to question just where we are heading ‘Art is about asking questions’