A history of open planning

Since the concept of the OERu was first presented at the OER for assessment and credit for students open meeting in February 2011, all meetings have been streamed live on the Internet with opportunities for remote participants to engage in the breakout sessions and planning activities. All proceedings are recorded transparently in WikiEducator.

A note about naming conventions

The OERu has adopted the convention of referring to the year and month when citing specific meetings. For example, the OERu 13.10 Meeting of Partners refers to the 2013 meeting which took place in October, the 10th month of the year. Consequently this year's meetings are referenced as the "OERu 19.10" meetings.

The international meeting of OERu partners

OERu partner meetings are not conferences, but open implementation planning meetings. They are strategic planning sprints designed to produce outputs in a short period of time which are then refined and improved openly in the wiki after the meetings. Observers from institutions who are interested in joining the OERu network are welcome to participate in these meetings. 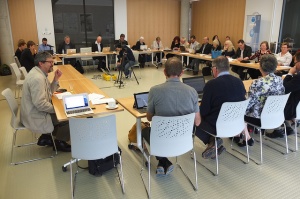 3rd Meeting of OERu Partners
The OERu maintains detailed records of all its meetings including video recordings of the plenary sessions.

The full reports and video recordings of each meeting are available in the wiki: 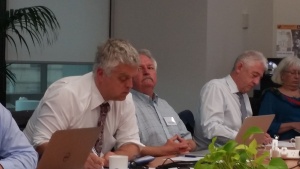 2nd meeting of the OERu Council of CEOs
The OERu Council of Chief Executive Officers (CEOs) functions as an assembly of senior leaders called together for consultation on strategic higher education futures and open education approaches. The meeting is reserved for the CEOs of partner institutions (or their designated representatives.)

The CEOs meeting is conducted in camera, however agendas and meeting reports are published in WikiEducator.