This activity will expose students to the natural fauna of Colchester Vermont through the experiential exploration and identification of small mammal tracks.

Each student will be given an Animal Tracks Pocket Guide courtesy of Vermont Fish and Wildlife Department. The will also be given a list of questions to answer about the track they have selected to match the track on their index card, these questions are meant to help explain their choice.

Greet the students and parents and introduce ourselves. Educator(s) will begin by explaining some of the basics of animal track identification. After students will be divided into groups, and will be given an Animal Tracks Pocket Guide and a handout to complete. Each group will locate footprint trays and identify the tracks they find using using their Pocket Guide handout and record using their Mystery Tracks Worksheet what animals are represented (see Handouts section). Students can work in pairs or individually to identify tracks. After identifying one track a student may move on to another or assist a peer in identification. After each group of students has completed identification the entire group will reconvene at a central location to discuss each groups findings. Each group will have to explain using the information from their Mystery Tracks Worksheet why they believe that they have discovered evidence of the animal they identified.

It is most likely that we will see tracks from small mammals from the Rodent Family as well as Rabbits and Hares, however, comparing them to the tracks of other animals gives a good sense of the variety of tracks that animals can make. 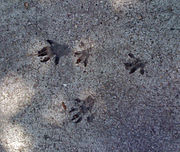 This lesson plan is based on capturing evidence of animal species in the area in the form of animal tracks. It relies on the bait in conjunction with footprint trays to attract the animals and provide evidence of their presence, therefore there is always the possibility that no tracks will be left in the footprint trays either due to avoidance by the animals or weather conditions. This activity is also somewhat dependent on a diversity of animal tracks which should be ensured by using two different types of bait (Single-serving Peanut butter and Chicken).

Use of rulers in measurement is an important skill that will be addressed in this lesson. Measurement of the tracks will aid students in determining the identity of the track.

Wild Tacks!: a guide to nature's footprints by Jim Arnosky

All available at the SMC Durick Library!

This lesson plan is a way of gaining insight into a local ecosystem. This ecosystem is influenced by a number of factors including the Saint Michael's College Compost Pile as well as the near-by Winooski River. Based on this information as well as the animal tracks that are found during the activity the students will gain an understanding of the types of species that can be supported by an area with these resources.

What do the foot prints found tell us about the fauna of Chittenden county?

What are the impacts of Humans on these animals?

Overall, the activity went very well. The kids seemed excited to look at and figure out what kind of animals had visited the footprint trays (see Figure 5.). They were less interested in what the animal tracks might tell us about the environment that they live in, or why we might have seen some animals in the fields and not near the compost or vice versa. Fortunately we were able to get a variety of footprints for the kids to look at and even found some surprise footprints near the compost area where we set some of our traps. These included what might have been a wild turkey (see Figure 6.) and a coyote (see Figure 7.). The students seem to like this aspect the best, it prompted them to share their own experiences with finding evidence of animals in their backyards or neighborhoods. Unfortunately finding footprints outside of the trays that we set up is not always guaranteed, but is a wonderful surprise because it allowed us to look at prints that we could not have gotten due to the constraints of the footprint trays and bait used. If footprints were found by the compost area consistently we might be able to alter the activity to include footprint casting in addition to the identification using the guide. It seems that interest in the footprints of animals from the kids was much higher when the tracks were found in the area's natural substrate. For the short amount of time that we had the worksheet was not a top priority to the students, they were much more interested in the hands on part of the activity. Thankfully the worksheet was mainly a guide to identifying the track in the event that one of us was not able to help guide them through. The size of the groups allowed us (3 people to 7-8 students) to work with them in identifying. Also, we had hoped to discuss what the animal tracks we found my tell us about their habits or the environment that we lived in. Time constraints did not allow us to go into much detail but we were able to discuss our findings as a group and question students on an individual basis about the relevance of the tracks that were found. This activity worked well but perhaps could have used more hands-on activities like looking for the tracks or even if we had been able to have them put out the footprint trays in different areas and come back to find them, this would not have worked in our time frame though. The only addition I see as being feasible is making footprint molds in addition to identifying the tracks. As is, the activity still provided some very interesting tracks from a variety of different animals including skunk and fox and I believe that both students and educators had a fun and enriching experience! 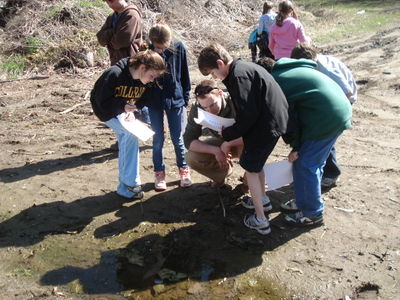 Figure 7. Examining animal tracks found in the mud during activity

While brand new ideas are very valuable and most welcome here, tried and trusted ideas of others will probably make up the bulk of the material on this site. It is important to respect the copyrights of others, and also to acknowledge their ideas. A full citation to published materials is essential and also useful. If there are online materials that would be useful to supplement your program, link to them from here.