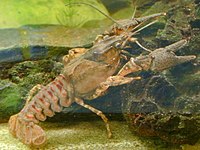 Crayfish have forward-facing claws and resemble small lobsters. It would be difficult to confuse these organisms with anything else from a Vermont stream. Seven species in two common genera (Orconectes and Cambarus) have been collected in Vermont.