Also, do not allow students to play with toothpicks. Teachers should handle all sharp objects.

This activity will expose students to the scientific method and allow them to make predictions about mold growth. Mold, a type of fungus, grows from spores that can often be found in soil. Mold also frequently grows indoors and can be found on bread, the substance of choice for this experiment.

Ordinary 100% whole wheat bread on the left; organic bread on the right. These loaves had been stored side-by-side in a refrigerated room for six weeks

Students will be given a worksheet guiding them through the scientific method and allowing them to form and test a hypothesis. Students will also have worksheets to illustrate predictions and observations, as well as a graphing worksheet to compare mold growth from white bread to wheat bread.

Figure 1 is a graphing tool that can be used to track the changes of the amount of mold growth on their bread. There are two bars that represent wheat bread and organic wheat bread. The mulitple graphs can be used to mark the days that the kids graph on. The students should mark the number of clusters of mold to correspond with the number on the Left side of the bar graph. 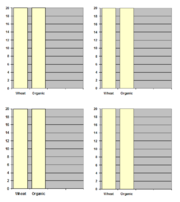 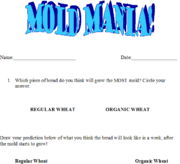 Students will first hypothesize whether wheat bread or white bread will grow more mold. They will test the hypothesis using a simple and inexpensive set up. Bread will be placed in a plastic bag to be observed and never opened. Students will measure mold on a daily basis and record the data to graph later. Students will analyze the results when the experiment is complete.

Also, in order to complete this experiment the class will have to allow a lot of time for mold to grow. This experiment will not grow mold overnight! After two weeks, our first piece of bread has not grown mold. Changing the bread to wheat and organic we found that mold did actually grow, it just took longer than our targeted time, which was one week. Please allow at least three weeks for mold to grow. Be patient! Our bread did grow mold, slowly but surely!!!

Students will be able to record the number of mold circles or clusters that appear each day. Using these data, they can construct a graph to show this information. (Figure 1)

This book talks about mold growth where, when, and how it happens. This book could be used as an introduction to this experiment.

After trying the first experiment, Students could try it again changing some variables. For instance, they could let all the air out of the bag and see if air affects the mold growth. Another variable students can change could be the amount of water or soil. Any changes to the original experiment may cause change and interest to the student. Changing one variable at a time is important so that you are able to see which variable makes a difference in the outcome of the experiment. Different experiments can bring up new questions of how and why the mold grows.

http://www.billnye.com/ This website was used for the idea of how to contruct this experiment.

Overall this experiment worked well. One regret is not doing an experiment that allowed for instant gratification. Students would have been much more engaged and excited if they had been able to see some kind of change before their eyes. If students seem bored or anxious for results it is important to remind them that not all science is instant. However, the content goals were completed successfully and the lesson worked well. Students were especially engaged in the topics of mold, fungus, and organic foods.

One thing to be aware of when conducting this experiment is that there are safety issues involved in using mold, and students tended to be reckless and sometimes poke holes in their bags. Also, it is important to have a lot of time to work with this experiment. It takes several weeks for the bread to grow mold inside a sealed plastic bag. It is suggested for the class to set up this experiment a while before discussion about the topic.

Another thing that we found is that the students saw that chemicals did have something to do with how quickly the mold would grow. Unfortunately, many believed that the chemials used to preserve some of the ingredients in the non-organic bread helped to produce more mold.

Also, the concept of graphing is something that takes time to teach, and it might be helpful to do a whole seperate lesson based mainly on graphing, correlation, comparison, etc. It worked well to have students make predictions and talk about what they thought would happen. It was interesting to see when the children worked with their parents how they gave each other reasoning for why they picked the kind of bread to grow the most mold. It is important to keep this experiment paralleled with the scientific method because it allows for a richer learning experience and reasoning for students.