This activity has been tried and trusted by at least several other groups of students who have taken this course before us.

2. Using the scientific method to complete a mini-lab

3. Measuring ingredients and following a recipe 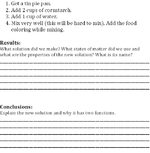 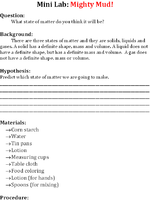 This activity will teach students about the different states of matter. The students will break into small groups and complete their own lab through which they will make a substance that is both a solid and a liquid. To start the activity students will write a hypothesis as a group, predicting what state of matter the ingredients will make. They will then measure out the ingredients, cornstarch and water, and mix them together. When the students mix the ingredients together they will realize what they have created and make the conclusion that it is a solid when pressure is applied, and a liquid when it is left alone. As a group the students will write a conclusion describing the results of their lab.

1. When the children first arrive at our group we will go around and say our names and tell them that we will be learning about states of matter today.

2. We will then ask them what they know about the states of matter, such as liquids and solids.

3. Going off of what they tell us that they know, or what they don’t know, we will use the posters we made to give them some background information on liquids and solids.

4. We will then explain to the children that they will be doing a “mini-lab” where they will come up with a hypothesis and carry out the experiment. The lab sheets will be handed out at this point.

5. We will ask the students what they think will happen when they combine a liquid and a solid. What will the result be? This will help them form a hypothesis, which they will record on their lab sheets.

7. They will then mix the water and cornstarch all together and add the food coloring.

8. The children will handle the substance and make conclusions about what happened

9. They will record their results on their lab sheets

10. Children will wash their hands

11. We will go around and ask all the children to tell us something that they learned in the time spent at our station

The following are possible challenges that we may have with our lesson plan:

A great follow up activity, for the younger grades, would be to read the book Bartholomew and the Oobleck by Dr. Seuss. This book is about the solution that the students will be making during their experiment. This would not be a good connection for the older grades because they are a bit to old of this type of literature.

While students complete this experiment, students will complete a mini lab. Students will generate a hypothesis, analyze data and generate a conclusion after that have finished their experiment. Students will make their once solution with a partner and as they complete there lab, they will record there findings. This is a major component of this experiment because it helps students understand the concepts of solids and liquids. However, when doing this with the younger grades, the students would not be doing their own lab but I would have the students reflect on the experiment with a short few sentences.

Teaching the Three Phases of Matter

Is it a solid, liquid or a gas?

A solid, liquid or a gas?

Everything is made of something.

All materials are made of matter.

Solids, have their own shape,

A book, a chair, a table or plate.

Until a force comes along to change it!

Liquids take the shape you know,

Of whatever is holding them.

Gases, the bubbles in my drink.

The oxygen I breathe that helps me think.

Gases all around everywhere.

So hard to see, but they’re still there.

Is it a solid, liquid or a gas?

A solid, liquid or a gas?

S3-4:12 - Students demonstrate their understanding of the States of Matter by...

S3-4:4 - Students demonstrate their ability to conduct experiments by...

To expand on this activity we could have had the students run over the Mighty Mud as many have done on TV. This would have enriched their understanding of it's solidity. The students could have also made diagrams of the molecules in the different states of matter if there was enough time. By doing this the students would have been able to demonstrate the characteristics of solids, liquids, and gases.

I think this activity went very well! The students really enjoyed being able to make something on their own; it was fun seeing them take charge in the mini lab. Also, this recipe worked really well for the little amount of money that we spent on buying the materials. The students were very engaged in the activity during the entire twenty minutes that we spent with each group. They were also very eager to answer our questions throughout the activity. The mini lab idea worked very well because it forced students to come to their own conclusions by proving or disproving their hypothesis. This activity allowed us to teach as we played with the mud along with the students instead of just lecturing them. The hands on learning led to students making conclusions about the states of matter that they could actually see. The challenging points of this activity were trying not to rush the students along in their making of the mud (or their playing with it) due to the small amount of time that we had with the kids. And some students had done this activity before, which was a disappointment for us, but they still enjoyed participating and learned more about the states of matter in the process. Also, this activity can get very messy, very quickly, and we were lucky that we had prepared for this. With that said, it is very important to make sure you do this over some sort of table covering, and have a sink very near by! This activity was fun, cheap, and most importantly the students learned a lot! I would definitely do it again! --mcoughlin

I had a lot of fun doing this activity with the students, and I think that they had a lot of fun with it too. They loved actually creating and playing with the oobleck (or mighty mud) and seemed to have a lot of fun getting messy! One thing that caused lots of excitement was adding the food-coloring and making the mud a fun color. So I think they had a great time with our activity, but at the same time we taught them about the states of matter, talked with them about the molecular formation and characteristics of each state, and I am quite certain that every child learned something- whether it was the fact that there are three main states of matter or what a colloid is. Even those students who had already done this activity and knew what we were making had fun and learned something. That though, was the biggest challenge for me. It was hard to get the students ho already knew what was going to happen to not spoil it for the rest of the group. I had been a little worried about that because I know I had made oobleck several times throughout my elementary school years and I suspected that these children might have too because it is a fairly common science activity. They wanted to say what they knew was going to happen, which makes sense because they were confident about knowing the material that we were teaching, but it was a little frustrating and made me a little less confident about what we were teaching because some of them already knew it.

After the students left and we cleaned up I actually saw them in Alliot and had lunch with some of them. I asked them how they liked the activities and they talked a little about what they liked best. One of the girls I was sitting with commented that the oobleck "reminded her of quicksand", which I thought was a keen observation. I asked her why shy thought that, and she said "because when you touch it quickly it is like a solid, but what you touch it slowly it is different". Compared to the last group of students that we taught, I think it went much more smoothly and successfully this time. Both of our activities have been very messy- we seem to like messy activities! But this time I felt like we were much more under control and that we werent having to fight for that control. They actually seemed like they wanted to learn, and although not everything went perfect, I feel like it went very well overall and I recommend this activity to teachers/ other students taking this course. For my Teaching Reading and Language Arts class we are going to be visiting Edmunds Elementary School, and after having a successful experience teaching our Biology lesson, I am really excited to observe them during their word study lesson.

I noticed that we have an error in our handout- we listed lotion twice. I am not sure how to fix that because I am not very good at editing on here, but I just wanted to note that error. And next time that we teach, we should be a little more careful about editing our handout before teaching the students and uploading it onto our wiki page. In conclusion, I felt like this activity went well and I will definitely use it with the students in my class someday! --mbssmc