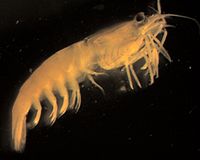 This freshwater shrimp was found in streams in Puerto Rico. Its body is laterally compressed and the third pair of its pereiopods (walking legs) lack chelae. Unlike the primarily benthic crayfish we see in Vermont streams, palaemonid shrimp can be quite active in the water column and frequently jump out of the water when approached. Freshwater shrimp in two other families (Atyidae and Xiphocarididae) occur in Puerto Rico but we have not collected them at our stream sites. 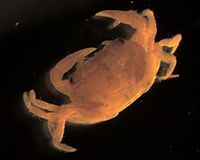 This is a freshwater crab found in the streams of Puerto Rico. We would usually provide anatomical descriptions here, but if you found a crab in a stream in Puerto Rico, it belongs to this family and in fact it is Epilobocera sinuatifrons. This species is endemic to Puerto Rico.
Retrieved from "https://wikieducator.org/index.php?title=Maracuto_Creek_46&oldid=763249"
Categories: