Sports is under the umbrella of the Ministry of Education, Youth and Sports. The very recent events in the history of sports is the South Pacific Games held in Samoa. Today - Friday 14th September 2007 the Kiribati Contigent returned home. Following are some snapshots of that event.Return to Life_in_Kiribati/The_maneaba_System 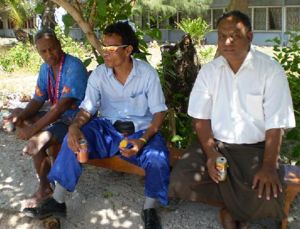 Pictured left is the Honourable Minister for Education, Youth and Sports - Hon. Tetabo Nakara - who hosts the reception function to formally thank the returning athletes from the recent SPG held in Samoa.

Members of the Reception Party 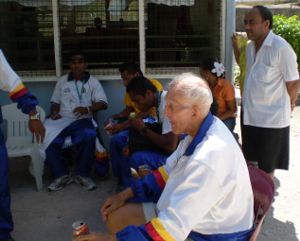 Captured right is David Little who led the athletics team and Batoromaio from the MEYS. At the background are members of the Kiribati squad.

The Three Men From the South 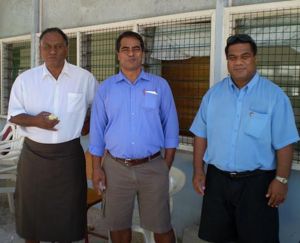 Pictured left are the Honorable Minister - Tetabo Nakara who hosts the reception; Tebania Tebakabo - the Director of Education and Offcier in Charge of the Ministry of Education Youth and Sports, and Tebwatoki Tawetia - the Senior Education Officer for Basic Education. These three men were part of the MEYS reception team. 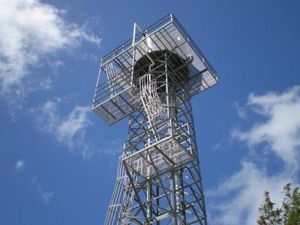 Seen right is the water tower that holds the sewage sea water for use in the Bikenibeu area. This was build in the 1990s as an Aus AID project.

Members of the Party

Included in the reception were the parent of one of the weight lifter, who has stayed behind to train for the next olympic competition. He is seated with the Honourable Minister, and David Little. 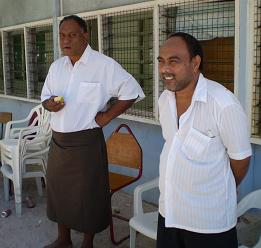 These two gentlemen are from Beru Island. They also are officers from the Ministry of Education, Youth and Sports. Pictured is Tetabo Nakara and Batoromaio Kiritian. The Minister has recently won back his seat from Beru on a majority and has a promising political career ahead of him. Ministers retain their portfolios until the next government is sworn in. On Monday the 17th September the new house of parliament will be sworn in, a new speaker elected, and 3-4 presidential candidates will be selected by majority secret

vote. After that the nation will then vote for a majority vote president.This will be done in October 2007. 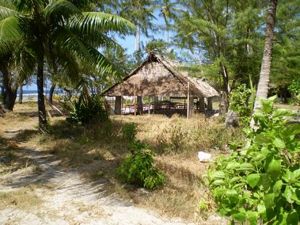 Located in the centre is the traditional maneaba of KGV. This small but typical maneaba is used as a symbol of culture and is used during Te-Kiribati studies at KGV and EBS. 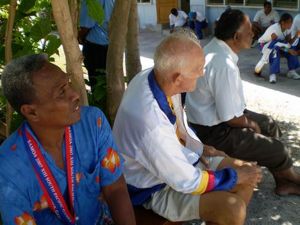 Pictured is the representative for the table tennis squad. He gave a report on the recent SPG and highlights major areas for improvement in the future. 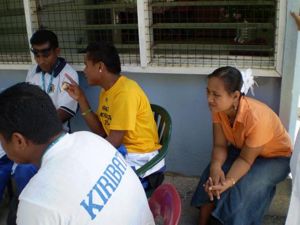 Pictured right are officers of the Ministry and members of the Kiribati squad mixed and listening to presentations. Pictured is Nei Aka Maroti Rimon. She is the senior assistant secretary and was directly responsible for organising the reception. At the background is the wall of the MEYS office which housed the admin staff and the registry. This building at one time was the dormitory for KGV boys and was called 'Holland' House. It was a construction during colonial days and the author spent 4 years in that house between 1971 to 1974. This was the power base of sportsmanship and many other male related activities of a boarding facility. This building is quite resilient and has stood the test of time, rain and heat. It became a home economics laboratory for girls and later the office of the MEYS. 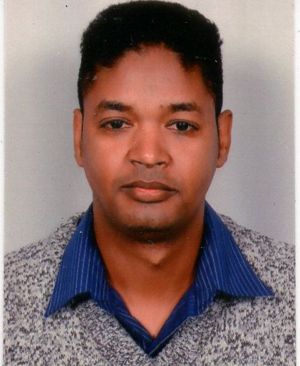 Again shown are members of the Kiribati SPG team during the receiption at the Ministry of Education, Youth and Sports. The 4 team contingent comprised the table tennis team, the tennis team, the athletics team, and the weightlifting team. Most of the team are young students of secondary schools. Kiribati won 6 medals and this Samoa South Pacific Games brought home a clear meassage which is that sports has gained prominence in the life of the I-Kiribati, and therefore has to be accorded proper attention, resources, and support if in future games Kiribati is to become more competitive and dominating.
Retrieved from "https://wikieducator.org/index.php?title=Life_in_Kiribati/Sports&oldid=70022"