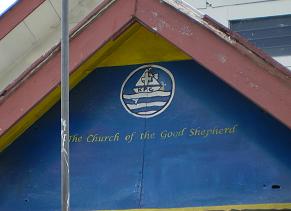 This is the KPC Church on Betio. It is called the 'Church of the Good Sheperd'. It is one of the oldest on Tarawa compared to other KPC church buildings on South Tarawa. 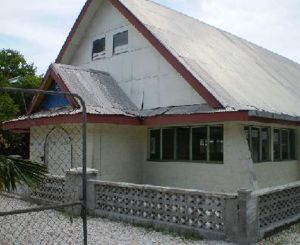 This is the Betio KPC Church captured from the west. It is indeed situated on Betio and Betio is one place in Kiribati that is quite heavily populated. It is the hub of commerce, communication, and point of call for ships, people, and islands. 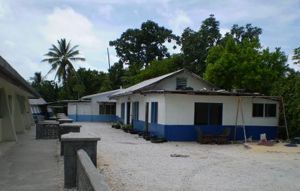 This shows the Betio KPC church which is the centre for religious life for the KPC community on Betio. Betio at one stage was the cntre for relious activity. Time, development and space has placed this on villages to the east such as Bikenibeu.

Pictured left is the Church compound on Betio. It houses the Church the Maneaba, and the residences of the Minister. This is the church compound for the Betio ICC which became independent only earlier this year from the other TUC ICCs. 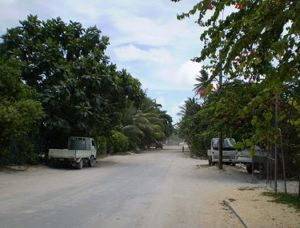 Betio is congested and space is becoming a rare commodity. Seen here is one roadway on Betio. It is a roadway that leads to Eutan Marakei Maneaba. As seen it is a break amongst buildings, houses, and trees, and 'lives amongst the people'. 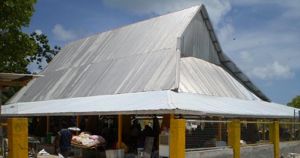 Pictured is Eutan Marakei Maneaba. It is one of the oldest Maneaba on South Tarawa built for an island. This was done before independence in 1979. Today this Maneaba is being renovated in time for the Silver Jubilee which falls on October 2007. Only 27 years after independence, was the idea adopted by other islands to have their own Maneaba like Eutan Marakei for Marakei. In this aspect, Marakei has taken thee lead to be visionary and advance. 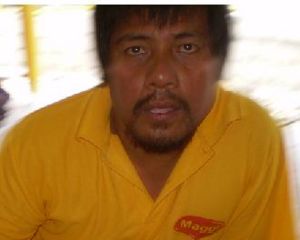 Amassing under Eutan marakei Maneaba are the sons and daughters of Marakei Island. Seen here is Mr. Moannata Ientaake. He is one of the young men and is a member of the 4th generation of I-Marakei living on South Tarawa. 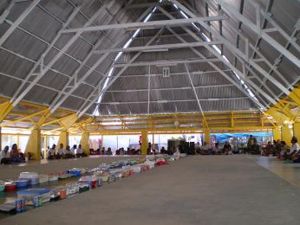 Seen left is a row of food contained in trays lined up for the feast. The feast was in honour of the 'workers' who came from Marakei to do renovation work on the Maneaba. The renovation involved extending the peripheral veranda of Eutan Marakei Maneaba to create more space for the supoort women and men and children during occassions and functions, and especially for the Silver Jubilee celebrations set for October 2007. 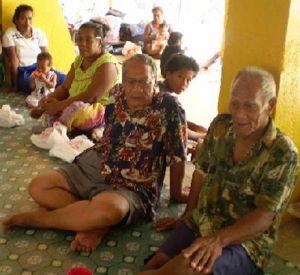 Pictured here are two old men from Betio. They are from the island of Marakei and are the 3rd generation descendants. The one on the left is Mamara. He was been a member for Marakei at one time and has now retired. Like many he is residing on Betio where he has children and grand children all matured and making up the population of Betio. 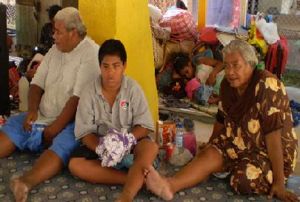 Pictured left is Kobure, his wife and kid. Kobure is from Marakei. He has a dancing group from Causeway which also performed later. 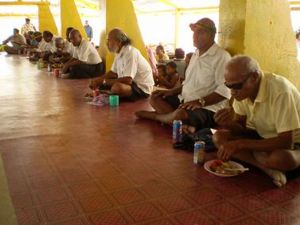 Pictured are a row of old men of Marakei again in attendance during the feasting function at Eutan Marakei Maneaba. These men are from Betio and South Tarawa. 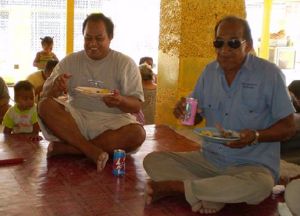 Shown next is Moemoe and Bauro. These men are enjoying their lunch and discussion. Moemoe is a qualified accountant and was tasked to audit the Marakei shop close to the Maneaba. He is an I-Marakei and works in a government ministry on South Tarawa. Timon is also from marakei and has retired form government and is now residing on Bonriki, the village of the international airport. 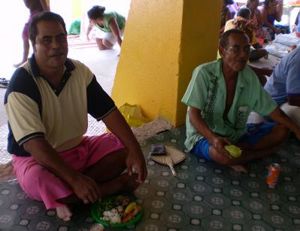 Pictured right are two gentlemen from Causeway who originally were from the village of Rawanawi, Temotu, Marena, Buota but have spent their lives away from Marakei mainly on South Tarawa. The old man is Areru Ioteba. he lives at Causeway, and has retired. The other fella is Tebania Tebakabo whose mother is from Marakei, but whose father is from Arorae, and hence has spent most of his growing up life on Arorae.The 2 are form Bikenibeu attending this Betio gathering. 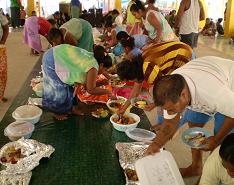 Pictured next is the feasting process. As usual, food is the main item of the ceremony. As is the custom old men, followed by younger men, women and children takes their share in the 'riches' of the feast in that order. The seating aslo reflect the ranking of the social people with the oldest in front and the youngest at the back with the women. 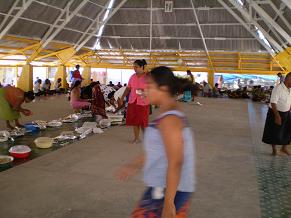 And so the people of Marakei on South Tarawa gathered under Eutan Marakei Maneaba on Saturday 15th September 2007 to celebrate the completion of the renovation work at Eutan Marakei Maneaba. This is celebrated with food, speeches, performances of dancing, laughter, and joy, and plenty of individual interactions where old acquaintances are renewed and new ones made, plus a re-newed allegiance to the social committment of isalndhood, familyhood, and communityhood. 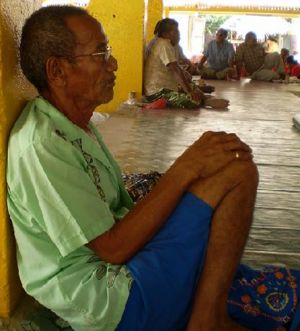 Areru Ioteba is the chair of the 'Natin Marakei on South Tarawa' Asoociation. He is pictured here leaning against the pole and attending to the feast process unfolding under his two eys. He is a deveoted I-Marakei son and was involved with the original construction of Eutan Marakei Maneaba. 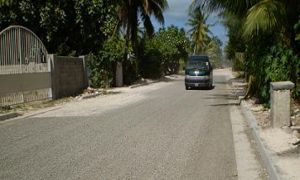 This is the new tar sealed road system that is slowly but surely taking shape on Betio. This is funded by the Government of Japan and supervised by the same government's construction company. This widens the road and adds a drainage system. The road side is lined with concrete bricks. Nearly all of Betio is being treated.This being done will give a facelift to the road structure on Kiribati and will allow control of water during raining days and especially will ensure roads last long.

Telecom Kiribati Limited (TKL) is the telecommunications owner for the government of Kiribati. Here is the headquarters of the Company again located on Betio on the ocean side. TKL currently runs the television station for Kiribati.

The Smallest Expensive tarabuti of Betio 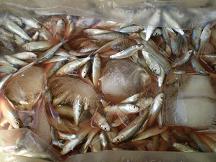 Of all of the ocean and lagoon goods sold on Tarawa, perhaps the smallest but most expensive of all is 'Te Tarabuti' - a small makerel looking fish that was once the 'riches' of Betio before and after independence. Te tarabuti is a small cod like fish that the Kiribati people love for raw fish. Because it is small, it soaks in well in flavour sauces and is readily prepared, and delicious to eat. Because of overfishing this group especially during the 'Te Mautari' period where these were caught in huge numbers and used for bait, the breeding population of te tarabuti has not been able to sustainably keep up the population, and hence their numbers get smaller every year, resulting in their kind becoming very difficult to get, hence the prize for a kilogram keeps getting dearer. Currently it is the most expensive of all fish, and is used only for bait, or raw fish if one can afford. 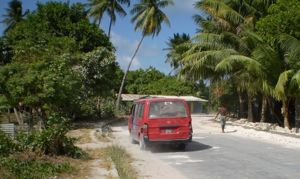 Transport on Tarawa is by bus. Buses are privately owned. Because of fierce competition for passengers and money, buses speeds like 'bullets' in villages on South Tarawa. Buses provide a very reliable, fast and at times dangerous transport system on Betio and TUC. Seen here is a red bus on Betio. Also noticed is the new roadway currently under construction assisted from the Japanese government.Hopefully the new road system will make roads safer, and more user friendly. The road system is also catering for pedestarins walking or jogging. This is catered for by side walk provisions. Riding on Betio to Bikenibeu takes quite a long while because the road speeds on Tarawa are quite small. The road speed in a village which is almost the whole of the public road system on South tarawa and Betio, is 40 km per hour. The buses are meant to carry a limited number of passengers, but amazingly fare attendnats on these buses can squeeze 4 people into the space for 1 person. This is utilizing space at the cost of human comfort but at the growth of buses daily income. To stop people complaining of congested space and terrific sppeds, buses are known for their very loud musics, so loud, people could sue bus companies for ear damages. Such is a story about bus riding on Betio and South Tarawa. 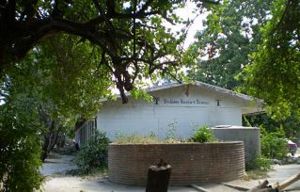 Pictured right is the Saint John Bosco Primary School. It is one of the oldest school on the capital and its inception dates back to periods before political independence.Primary schools in Kiribati are central to the education system and each island usually have one primary school. For Betio, with a population ten fold the outer islands population, one primary school in not enough, hence there are around 3 primary schools with enrolments into the thousand. Saint John Bosco School is one such large school and is stationed on the western side of Betio.

Pushing the Limits of Habitation 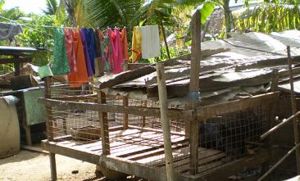 Pictured left is a settlement in the extremes of Betio. Betio since the war has changed tremendously. One of the expansion is the habitation into the very lagoon coast of Betio west, which before independence was beach, but has now been transformed into a very occupied space. Pictured is the multi use of space. As seen the houses, the laundry., the animals, the trees, the pathways, the well, and the many others are all placed near each other. This shows how Betio have been fully utilised after independence to become one of the most densely populated areas on Kiribati 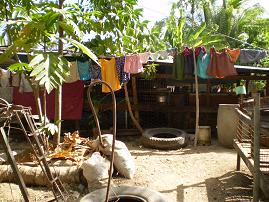 Seen to the right is the settlement on 'Te O ni Beki'at Betio. Here is home to a couple of thousand people squeezed over a few square kilometres of land. Because the land is full, people extend their land boundaries into the lagoon area and therefore Betio is well known as a village growing into the lagoon. 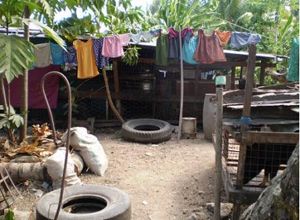 Here is the typical household on Betio where quite a lot of people live and also manage their domestic friends within their living boundaries. Pigs and people live in harmony and share many common relationships including food where the pig provides the ceremonial guest food. Betio and urban Tarawa in this respect is a crowded place, where space is a limitation and the high population density puts pressure on the land, resources, space, cultural norms, and where ecological systems are reshaped, re-aligned, as nature and man tries to live in peace and harmony.Betio is well known for being the small Kiribati becuase on Betio, one would find all of Kiribati represented. Therefore Betio find s people from all islands living in government houses, and also living on private land. Therefore Betio is like a melting pot where cultures of the people from the different islands mix, where the values and tarditions and norms, and expectations of people from different islands and parts of Kiribati mix and blend to form a unique culture of its own. On Betio too, many intermarriage of people from different islands, and religions to form a cohort of mixed people with mixed traditions, values and norms.
Retrieved from "https://wikieducator.org/index.php?title=Life_in_Kiribati/The_maneaba_System&oldid=70018"