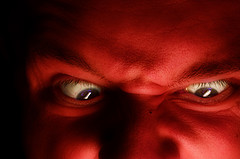 I wonder what made him so angry...

Anger may be defined as:

Anger may be "provoked" (or triggered) by perceived threats, like conflict, or by abstract concepts such as injustice, humiliation and betrayal among others.

The open expression of Anger Out by one person on another person is almost always followed with guilt. Immediately the person may feel some elation for having "gotten it out" but the frequent normal response is guilt. Guilt then will lead to remorse that the person had been so hard or mean to the person upon whom the anger was vented. This remorse will function like a "self-checking" device and result in the anger being held in so that the anger becomes "Anger In", which can lead to depression. This "Anger In" over time will lead to resentment towards the original person towards whom the open anger expression was delivered. If this person down the road begin to irritate the "angry person" over time the anger person will not hold in any more and express anger out all over again. Leading to a repeat of the anger cycle of guilt, remorse, anger in, resentment, irritation and anger out expression. This is a maladaptive model of handling anger.

Therefore this cycle is not one that is recommended therefore the following is proposed as a more adaptive method to implement for dealing with one’s anger.

The instinctive, natural way to express anger is to respond aggressively. Anger is a natural, adaptive response to threats; it inspires powerful, often aggressive, feelings and behaviors, which allow us to fight and to defend ourselves when we are attacked. A certain amount of anger, therefore, is necessary to our survival. On the other hand, we can't physically lash out at every person or object that irritates or annoys us; laws, social norms, and common sense place limits on how far our anger can take us. People use a variety of both conscious and unconscious processes to deal with their angry feelings. The three main approaches are positive, negative and unexpressed.

Positive anger is expressed positively when the individual who is expressing the anger does so without hurting others or them self. This is the healthiest way to express anger. Some ways one can positively express anger is:

Negative anger is expressed when the individual who is expressing the anger does so by hurting others or them self. Some examples of negatively expressing anger are:

Unresolved/ Unexpressed anger occurs when an individual refuses to ‘deal with’ the situation or trigger which made them angry. Rather, they ignore or ‘bottle up’ their true feelings on the matter. Thus, their anger is never resolved, or managed positively. This in turn produces tension and stress which is continuously accumulated until one day it releases itself in a negative way. IDevice Icon Assignment List some of the ways that you have observed persons attempts to deal with their anger. Include in this list the ways in which you deal with your anger and include the complete list in your Portfolio

How to Overcome Unresolved Anger

In handling a “current” anger situation you may have come upon a “trigger” event that brings up past feelings of hurt, pain, resentment, hostility, or anger. The trigger event is not what you are actually reacting to, but rather it is the past situation, (one that went unresolved) to which you are reacting.

The following steps will assist you in working out this unresolved anger:

Step 1. Take a pillow or cushion and go alone to your bedroom or to a quiet location.

Step 2. Position yourself so that you are kneeling in front of the pillow or cushion, which is either on a bed, a chair or the floor.

Step 3. Begin to visualize a scene or series of scenes surrounding the situation, event, or person with which you have unresolved anger.

Step 4. As you are visualizing the scene, begin to pound your pillow and yell out how you “feel” about the situation, event, or person. Yell your guts out!

Step 5. Continue pounding the pillow and letting out your feelings until you feel satiated.

Step 6. At this point begin to use your reason and rationality to reframe or restate the situation. Begin to allow yourself to forgive those situations, events, or persons for what happened to you. Do not proceed to the next step until you can come to a “healing” of your spirit at this point.

Step 7. Once you feel as if you have been able to forgive and you feel healing beginning, write down what it was that made the reframed or restated situation have less blame and thus be able to be forgiven.

Step 8. If person(s) involved in the unresolved anger situation are still available (alive) and capable of communicating on a healing, non-blaming, feeling level, share your resolution with them and let the forgiveness and healing become alive.

If the person(s) involved are unavailable, let the forgiveness and healing take hold in your heart.