How heritage influences who we are, what we like and how we live 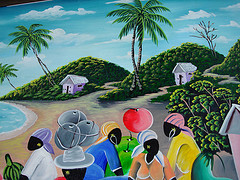 What does Heritage mean?

Heritage is what we recieve from the past. it shapes our present identity and provides insight for our future. It includes a range of activities such as stewardship, preservation, research, education and engagement. It encourages sensitivity to differing perspectives regarding objectives, ideas, places and traditions.

What ethnicities exist within Trinidad and Tobago?

Trinidad (but not Tobago) is ethnically heterogenous. This diversity includes Amerindians and people form Afica, India, Europe, China and the Middle East. Trinidadians and Tobagoians (the population of Tobago is almost 100 percent African descent) identify stringly with their home island and believe each other to be different culturally.

How it is that Trinidad is heterogeneous whilst Tobago remains homogenous?

Like their South American neighbours, the islands were inhabited by First Nation peoples, mainly the caribs and the Arawaks, until the majority was killed by Europeans after 1498, when Columbus set foot in the West Indies. Trinidad was in the hands of the Spanish from the 15th century until it was captured by the British in 1797. During the Spanish rule, very few Spanish people settled in trinidad. this was during the time of the French revolution, and many French fleeing the conflicts between the Royalians and the Republicans accepted the offer made by the Spanish to colonise Trinidad. French planter from the French islands of Martinique and Guadeloupe came during this time. When the British arrived, they met a country ruled by spanish with French speaking citizens. Tobago's history is very different from that of Trinidad. it changed hands many more times and was ruled at one time or another, by the Spanish, Dutch, French and British.

Trinidad became a British colony in 1802 and Tobago in 1814. They were enjoined administratively by the British in 1889 and then politically linked as a joint colony in 1890. With the abolition of slavery, and the refusal by the colonialists to pay the freed Africans a decent watge, a shortfall in labour for agriculture, was met by the Indians, who began to arrive in Trinidad in 1845, as indentured labourers. They emigrated from bengal, Bombay, Madras, Punjab and other provinces, and had both Muslims and Hindus among them. Chinese and Portuguese from the island of Maderia also came as indentured labourers. Early this century, many Syrian and Lebanese also came to Trinidad and played an important role in commerce. Up to the 19th century the islands like most colonies, developed as primary producers, supplying produce to be traded on the internatonal market, for the benefit of the colonialists. Traders from England, Scotland, germany, France and the United Staes, came to Trinidad as salesmen, entrepreneurs and bankers. Compared to the other islands, Trinidad was a wealthy, cosmopolitan country. 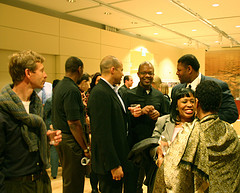 A recent meeting at the Museum of Diaspora

The term diaspora (Greek διασπορά, a scattering or sowing of seeds) is used (without capitalization) to refer to any people or ethnic population forced or induced to leave their traditional ethnic homelands, being dispersed throughout other parts of the world, and the ensuing developments in their dispersal and culture. We are part of several diasporas.

The Timeline for the East Indian, African and Chinese

1. How have these different races contributed to societal development?

Each ethnicity has contributed to the development of society in general. Their discoveries have benefited Trinidad and Tobago in particular. They came to Trinidad and Tobago and brought with them their cultures and traditions, which have been adapted into the Trinidadian culture.

2. What are some great achievements made by Trinidadians?